Glenview is an affluent suburban village located in Cook County, Illinois on The North Shore (Chicago). As of the 2010 United States Census, the village population was 44,692.

There were 16,783 households, of which 33.7% had children under the age of 18 living with them, 63.9% were headed by married couples living together, 7.0% had a female householder with no husband present, and 26.7% were non-families. 24.3% of all households were made up of individuals, and 14.6% were someone living alone who was 65 years of age or older. The average household size was 2.62 and the average family size was 3.15.

The entire Northfield Township originally was known as the town of Northfield. There were different names for various areas within the community. The Post Office demanded that an official name be selected, whereupon a special meeting of the villagers was called. Various names were suggested such as Rugenville, Glenvarr, Glendale, Glengrove, Glen Hollow, Oak View, and Glenview. The name Glenview won the majority vote on May 7, 1895. The village was incorporated in 1899. Much of the Glenview area remained farmland but after World War II, developers such as Tom Sullivan began to give the township its current suburban appearance.

"The Park" is one of the oldest neighborhoods in the village. Located near the center of Glenview, just south of the Glen development, The Park was established as home to a religious society in 1894 by Hugh Burnham, the first village president and nephew of architect Daniel Burnham. This religious society is based on the writings of Emanuel Swedenborg a scientist and theologian who lived and wrote in the 1700s. In the late 1890s through the turn of the century, New Church members purchased 40 acres of land and built their houses in an oval surrounding a common park area where the church and school were built. Architect Swain Nelson, one of the designers of Lincoln Park, designed the neighborhood.

As part of the New Church service mission to be universally accepted as a guidepost for kindness and character, today, the Glenview New Church Schools are open to many students beyond the congregation and the church has been updated and expanded to accommodate a much larger Sunday service. Despite its new open focus and broadening congregation, the original church in the center and many of the surrounding buildings remain the same today as they were in 1900. 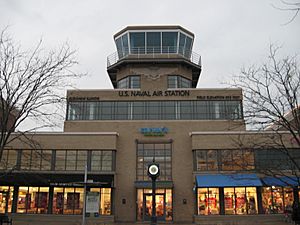 The control tower of the village's former Naval Air Station has been converted to shops as part of The Glen Town Center.

Naval Air Station Glenview was a major facility in Glenview for many years. It was the host for a number of squadrons, including the Coast Guard air/sea rescue helicopter service for Chicago/Lake Michigan and a squadron of P-3 Orions which had the mission of East Coast antisubmarine warfare. The rationale for basing the squadron there was that so many reserve staff were in the central United States, and it was convenient to base the facility near the staff. As a 1−2 hour checklist had to be executed before scanning the seas, there was actually little dead time in the flight to the coast. The base consisted of 1 million cubic yards (800,000 m3) of concrete, 1.5 miles (2.4 km) of runways and 108 U.S. Navy buildings. The only two buildings that are left from the naval airstation are the pilot tower and the chapel.

In 1995, the base was closed as part of the Base Realignment and Closure military restructuring process. The land was deeded back to Glenview by the U.S. Department of Defense. A reuse plan was completed by the Village of Glenview in 1995 and updated into a master plan by Skidmore, Owings & Merrill in 1998. The village then assumed the role of Master Developer. The 1,121-acre (4.54 km2) development was named "The Glen" in 1999. It comprises approximately 15% of the area of Glenview. It contains new homes, offices, and shopping centers, including a movie theater and The Glen Town Center. Among other amenities, it includes a lake, soccer fields, walking and biking trails, two golf courses, Kohl Children's Museum, the Glenview Park District Park Center, Attea Middle School, and the Glen/North Glenview commuter train station.

On July 4, 1985, the annual fireworks display at the Glenview Park Golf Course erupted on the ground after a misfire, injuring 6 people.

The Park Center is a prairie-style multi-purpose community center, one of the largest in Illinois, and is located in the heart of The Glen on the shores of Lake Glenview. The Park Center has an indoor pool (Splash Landings Indoor Aquatic Complex), Park Center Health & Fitness, Park Center Preschool, Glenview Senior Center, along with many programs including arts, dance, and adult and youth sports programs. 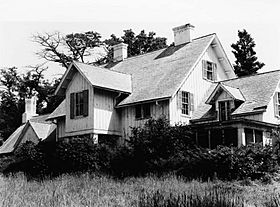 The Grove includes the Kennicott House, which was built in 1856.

The Grove is an area of prairie that contains an interpretive center, historic buildings, and nature trails. The Grove houses many animals for visitors to interact with, such as snakes, snapping turtles, and skunks. Covering 123 acres (0.50 km2), the land was formerly the home of Dr. John Kennicott, who settled in the area in 1836 from New Orleans, the Kenniott family lived in a log cabin until the Kennicott House was built in 1856. John Kennicott was influential in the advancement of horticulture in Illinois. His son, Robert Kennicott, became interested in natural history, his research contributed to the American purchase of Alaska, and he was one of the founders of the Chicago Academy of Sciences. Robert's brothers Flint and Amasa started the Kennicott Brothers floral distribution company in 1886, which is still in business today. Members of the Kennicott family lived in The Grove until 1966. The Grove was designated a National Historic Landmark by the United States Department of the Interior in 1976 and is listed on the National Register of Historic Places.

Wagner Farm is an 18.6-acre (7.5 ha) farm owned by the Glenview Park District. Wagner Farm is the last remnant of a much larger farm which was owned and farmed by members of the Wagner family since their arrival in this area from Trier, Germany in the 1850s. In 1997, Rose Wagner, the last surviving member of the Glenview Wagner family, died. Her will directed Glenview State Bank, the trustee for her estate, to sell the farm to the highest bidder with the proceeds to benefit her family parish, Our Lady of Perpetual Help Church in Glenview. A group of local citizens approached the park district and asked the district to buy the farm and preserve it as an historic working farm for the education and enjoyment of the community. With citizen support, a referendum to approve funds to pay for the farm was approved by the voters in 1998 and the park district purchased the farm in 2000. In 2007, the farm had over 54,000 visitors. Also in 2007, Wagner Farm became home to the Glenview Farmer’s Market.

Johann and Katharina Wagner came to the United States from their home in Weiler, Germany in the winter of 1855. They eventually settled in Gross Point (modern day Wilmette), an area with a high population of German immigrants. Over time, the Wagners established their home on the southeast corner of Lake Ave and Wagner Road, in the heart of what is present-day Glenview. By 1898, the Wagner farm encompassed approximately 91 acres (37 ha), many of which have been replaced by housing and road development today. Johann and Katharina’s youngest son, Thomas, married Julia Brachtendorf of the Northfield Township in 1892, and ten years later they purchased the Hoffman farm on the northwest corner of Lake Ave and Wagner Road. This is the area known as Wagner Farm today. The area was 40 acres (16 ha) then, but Thomas also inherited land on the northeast corner of the two roads. Thomas’s siblings inherited this land in the farm’s estate. Thomas and Julia had 5 children, 4 of whom remained on the farm for their entire lives. The farm was operated by Thomas’ children until the last member of the family, Rose (1903–1997) died in 1997. Rose stated in her Will that the farm should be sold, and placed in trust for a local catholic church, and it remains a property of the Glenview Park District today.

Wagner Farm offers hands-on programs on the farm funded by the Glenview Park District. The programs themselves vary from season to season, but they include activities like horseback riding, tractor driving, and more activities that reflect the life of a farmer in the 1920s.

Glenview's Farmers' Market was established in 1988 by the Glenview Women of Today. After years of running it, the group realized that maintaining the market was no longer in their interest. After the group abandoned the annual event, the Glenview Park District decided to move the market to Wagner Farm. This switch was historically suitable for the farm, given that at one point, Wagner was a truck farm that produced crops in bulk for the Chicago area. A spreadsheet of the number of crops per city that Wagner provides can be found on their website. In remembrance of Wagner’s truck farming history, a market wagon was constructed, and is now in display in the museum. The Farmer’s Market takes place between the days of June 25 to October 8, on every Saturday. It is located across the street from Wagner Farm, giving shoppers the opportunity to visit a working 20th-century farm. In addition to the food and other products that are produced by the farm, the Market features a different musical artist to perform each week. It is a great, family-friendly, destination.

Glenview is home to a rich variety of animals. These animals coexist with the human residents of Glenview and thrive in the many forest preserves that call Glenview home. The most frequently spotted birds in Glenview include robins, sparrows, cardinals, crows, Canada geese, mallard ducks, and occasionally great horned owls. In residential areas, squirrels, rabbits, raccoons, rats and mice cohabit with people. On nature walks through the Glen, the forest preserves, or The Grove, one can come upon white tailed deer, and an occasional coyote or fox. Also to be seen are brown rabbits, cicadas (both the 17-year and the 4-year varieties), box and alligator snapping turtles, and sometimes small frogs and toads. Among the arthropods and insects seen in Glenview are ants, bees, mosquitoes, daddy-long-legs, wolf spiders, and many others.

Glenview has a continental climate (Köppen climate classification Dfa), with summers generally wetter than the winters: 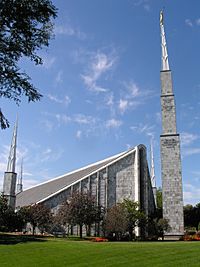 The Chicago Illinois Temple was built in 1985 and is located northwest of downtown Glenview.

Glenview is home to a relatively diverse religious community, including Evangelicals, Catholics, Presbyterians, Mormons, Lutherans, Methodists, Episcopalians, Jews, Hindus, and Muslims. Several religious communities are as old or older than the village itself. The village is home to two Catholic parishes, St. Catherine Laboure and Our Lady of Perpetual Help Parish. In 1985, The Church of Jesus Christ of Latter-day Saints built the scenic Chicago Illinois Temple in Glenview to serve Mormons in Illinois and surrounding areas.

All content from Kiddle encyclopedia articles (including the article images and facts) can be freely used under Attribution-ShareAlike license, unless stated otherwise. Cite this article:
Glenview, Illinois Facts for Kids. Kiddle Encyclopedia.