Wilmette is a village in New Trier Township, Cook County, Illinois, United States. It is located 14 miles (23 km) north of Chicago's downtown district (4 mi or 6 km from Chicago's northern border) and had a population at the 2010 census of 27,087. Wilmette is considered a bedroom community in the North Shore region. In 2007, Wilmette was ranked as the seventh best place to raise children in the U.S., according to Business Week. In 2015, Wilmette was ranked the best place to live in Illinois based on a variety of factors including its low unemployment rate, median income, low housing vacancy rate, high education expenditures per student, low crime, and short commute times. In 2016, the personal finance website WalletHub.com published its finding that the residents of Wilmette had an average credit score of 743, ranking it in first place among communities within the State of Illinois.

Wilmette has a well-developed urban forest and since 1983 has enjoyed "Tree City" status. As of 2006, village parkways hosted more than 18,600 trees comprising 150 species and sub-species.

There were 9,742 households, out of which 40.4% had children under the age of 18 living with them, 68.3% were headed by married couples living together, 7.1% had a female householder with no husband present, and 22.7% were non-families. 20.8% of all households were made up of individuals, and 12.2% were someone living alone who was 65 years of age or older. The average household size was 2.77 and the average family size was 3.23.

The village ranks 47th on the list of highest-income places in the United States with a population of over 10,000.

Before European settlement, a Potawatomi village was located on "Indian Hill", currently the site of a golf course in nearby Winnetka. The village is named in honor of Antoine Ouilmette, a French-Canadian fur trader married to Archange, a Potawatomi. For his part in persuading local Native Americans to sign the second Treaty of Prairie du Chien in 1829, the U.S. government awarded Ouilmette 1,280 acres (5.2 km2) of land in present-day Wilmette and Evanston.

German Catholic farmers from the area of Trier began settling the area in the 1840s. They named their village, which was centered west of Ridge Road, Gross Point. In 1848, Ouilmette sold his land to farmers and developers.

The Chicago and Milwaukee Railroad tracks were built in 1854, facilitating the settlement of what would become the North Shore. In 1857, John G. Westerfield built pickle and vinegar factories in the area. Other early commercial development included a cooperage, a brick kiln, and an icehouse.

Wilmette was nearly annexed by its neighbor to the south, Evanston, in 1894 and 1897. Proponents wanted to take advantage of Evanston's then superior fire, police, and water works. One annexation referendum lost by a vote of 168 to 165; three others also failed.

The Chicago, North Shore and Milwaukee (North Shore Line) arrived in 1899 and connected with a Milwaukee Road line into Chicago.

Gross Point's municipal revenues were dependent on the 15 taverns in town. With Prohibition, these revenues disappeared and the village went bankrupt. It was annexed in two parts by Wilmette in 1924 and 1926.

A naval gunboat, named the USS Wilmette, was commissioned in 1918. The vessel was originally the SS Eastland, a passenger ship which in July 1915 rolled over in the Chicago River, resulting in the deaths of 844 passengers and crew and marking the largest loss of life from a single shipwreck in Great Lakes history. The gunboat served as a training ship for naval reservists in the 9th, 10th, and 11th Naval Districts and later trainees from the Naval Station Great Lakes. The gunboat was decommissioned in 1940. During August 1943 the Wilmette was given the honor of transporting President Franklin D. Roosevelt, Admiral William D. Leahy, James F. Byrnes and Harry Hopkins on a 10-day cruise to McGregor and Whitefish Bay to plan strategies for World War II.

In 1942, Wilmette annexed No Man's Land, an unincorporated triangular shoreline area bordering Kenilworth, in the vicinity of the present day Plaza del Lago, that had been the subject of numerous municipal disputes and the site of a failed club hotel complex.

The oldest surviving Bahá'í House of Worship was constructed in Wilmette between 1920 and 1953. See "Attractions" below.

Wilmette was also the site of a significant fireworks explosion. According to the 'Wilmette Life, an explosion occurred on March 24, 1978, at 1221 Cleveland Avenue. The owner of the home, George Murray Yule, "had an illegal fireworks factory in the basement of his home." As the newspaper notes, the house was destroyed and "Yule died two weeks later of burns and injuries suffered." Homes in the immediate vicinity were damaged. The sound of the explosion could be heard several miles away.

In 2012 Random House published Kurt Andersen's third novel, True Believers. The novel's three main characters grew up in Wilmette during the 1960s. The book is a gold mine of mid–twentieth century Wilmette history, including a reference to a Woolworth's store once located in the Eden's Plaza shopping center—as well as a prominent Encyclopædia Britannica sign once displayed on Wilmette Avenue. 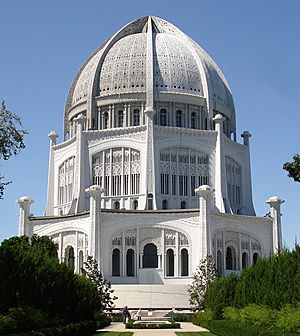 US Bahá'í House of Worship in Wilmette

Wilmette is home to the Bahá'í House of Worship, the continental Bahá'í House of Worship for North America and presently the only one in the United States, as well as the administrative offices for the Bahá'í National Spiritual Assembly. In 2007 the house of worship was named as one of the "Seven Wonders of Illinois" by the Illinois Bureau of Tourism. It is open seven days a week to anyone who wishes to visit. There is no charge and no collection is taken.

Wilmette has a two-theater multiplex named the Wilmette Theater located on Central Avenue in one of its downtowns. The theater shows classic films, contemporary movies, as well as hosting live performances.

Wilmette has three shopping centers. One of them is Plaza del Lago, one of the nation's oldest shopping centers. It is located along Sheridan Road. The other two, Edens Plaza and West Lake Plaza, are on Lake Street east of the Edens Expressway.

Other attractions include Gillson Park with beach access, marina, and an off-leash area for dogs; Langdon Beach; and Centennial Park, with a public swimming pool, tennis and ice-skating facilities. In 2013 the Wilmette Platform Tennis Club was developed, the new facility has 4 paddle tennis courts and a warming hut.

Gillson Park hosts a wide variety of activities that the whole family can enjoy. The beach has been a local attraction for decades. Swimming in the beach is only allowed in specific areas of the water. The park also provides its visitors with a part of the beach called the Dog Beach. The Dog Beach is located just south of the main public beach area. Here, visitors are allowed to bring their dogs for a fun day in the water. Depending on the weather conditions, the park's beaches may be temporarily closed in order to maintain the safety of the park's visitors.

Gillson Park also hosts a public theater, the Wallace Bowl, which is open during the summer season. This theater provides a variety of performances throughout the summer. The park also provides many opportunities for sports enthusiasts. Tennis courts are open from sunrise to after sunset, and there is space for people to play beach volleyball and soccer. Built-in grills for barbecuing are available throughout the park.

The Wilmette Golf Course, designed by Joe Roseman, is open to the public.

In addition to the Bahá'í House of Worship, Wilmette is famous for several other examples of religious architecture.

The oldest existing church building in Wilmette is the First Congregational Church (1909) designed in the Tudor Revival style. Trinity United Methodist Church (1928) is a Neo-Gothic structure and was designed and constructed by Granger & Bollenbacher of Wisconsin Lannonstone. The church features stained glass windows by Willet Studios of Philadelphia, among the top American studios during the 1920s. The church was used as a filming location for Home Alone.

Both St. Joseph and St. Francis Xavier Church were designed by the firm of McCarthy, Smith and Eppig. St. Joseph's is Wilmette's oldest religious congregation, established in 1843. The present building (1939) is among the finest examples of Art Deco architecture on the North Shore. The interior is particularly well preserved and features Art Deco light fixtures and stained glass windows designed and fabricated by Giannini & Hilgart of Chicago. The altar floor and sanctuary wall contain Italian and French marble inlaid with Portuguese onyx. The Stations of the Cross are pastel-hued mosaics crafted in the Vatican Studio of Mosaics in Rome. The design and materials of the Y-shaped school designed by Herman J. Gaul of Chicago and constructed in 1934, and the adjacent rectory, harmonize with the church. St. Francis Xavier Church (1939) was designed in the Late Gothic Revival mode while McCarthy, Smith & Eppig were simultaneously working on St. Joseph's. The stained glass windows were made with English and German imported glass by the famed F. X. Zettler Studios of Munich and New York City. St Francis Xavier School (1924), just east of the church, is a unique modern blend of Gothic architecture by Chicago architect Barry Byrne.

These places in Wilmette are on the National Register of Historic Places: 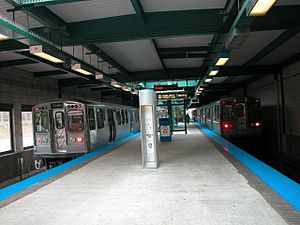 The North Shore Line through Wilmette was abandoned in 1955. Wilmette is currently served by the Chicago Transit Authority's Purple Line, the Metra commuter trains operated by Union Pacific Railroad on the old Chicago & Northwestern Railway line, and by the Pace suburban bus system. The northernmost station of the Purple Line is located at Linden Avenue in Wilmette. Wilmette's commuter railroad station is at Green Bay Road and Washington Avenue.

The village of Wilmette has a stated commitment to "promoting and creating a more sustainable environment through energy efficiency, improved stormwater management, water conservation, pollution reduction, and recycling." Wilmette and 11 other communities are competing in the ComEd Community Energy Challenge for a $100,000 prize for energy consumption reduction. The village has implemented some lighting and heating efficiency programs in some municipal buildings. Each year since 2010, the village partners with Go Green Wilmette to present Going Green Matters: Wilmette's Green Fair, a sustainable living and recycling event that attracts over 1,000 residents, exhibitors, vendors, and activists.

Wilmette's sister city in Australia is Mona Vale in Pittwater Council, New South Wales, and they participate in an annual student exchange program between their high schools. Mona Vale and Wilmette are connected spiritually as well: each is home to a continental Bahá'í House of Worship.

All content from Kiddle encyclopedia articles (including the article images and facts) can be freely used under Attribution-ShareAlike license, unless stated otherwise. Cite this article:
Wilmette, Illinois Facts for Kids. Kiddle Encyclopedia.