Winnetka (/wᵻˈnɛtkə/) is a village in Cook County, Illinois, United States, located 16 miles north of downtown Chicago. The population was 12,187 at the 2010 census. In 2015, Winnetka was ranked the richest municipality in Illinois and the second richest in the United States (behind Scarsdale, New York). The area is one of the most exclusive and wealthy suburbs in the nation.

There were 4,162 households out of which 47.2% had children under the age of 18 living with them, 76.1% were married couples living together, 5.0% had a female householder with no husband present, and 17.5% were non-families. 15.9% of all households were made up of individuals and 7.8% had someone living alone who was 65 years of age or older. The average household size was 2.98 and the average family size was 3.35.

The first houses were built in 1836. That year Erastus Patterson and his family arrived from Vermont and opened a tavern to service passengers on the Green Bay Trail post road. The village was first subdivided in 1854 by Charles Peck and Walter S. Gurnee, President of the Chicago, Milwaukee & St. Paul Railroad. Winnetka's first private school was opened in 1856 by Mr. and Mrs. Charles Peck with seventeen pupils. In 1859 the first public school building was built with private funds at the southeast corner of Elm and Maple streets. The first year's budget for this school was two hundred dollars. The village was incorporated in 1869 with a population of 450. The name is believed to originate from Potawatomi language, meaning "beautiful place".

The oldest surviving house in Winnetka is the Schmidt-Burnham House. It was moved in 2003 from its previous location on Tower Road to the Crow Island Woods.

Churches in Winnetka were also designed by noted architects. Among them, the former First Church of Christ, Scientist, 440 Ridge Avenue, was designed in 1924 by architect Solon S. Beman.

The Chicago and Milwaukee Railway was built in 1855 through Winnetka, connecting its namesake cities. It eventually became the Chicago & Northwestern Railway. Between 1937 and 1942 the railroad tracks through Winnetka were grade separated after several people were hit at grade crossings. In 1995 the C&NW was merged into the Union Pacific. Only Metra trains are operated on this track now; freight operations ended in the late 1980s. Winnetka has three Metra stations: Hubbard Woods, Winnetka, and Indian Hill.

The Crow Island School, designed by Eliel & Eero Saarinen and the architectural firm Perkins, Wheeler & Will, was declared a National Historical Landmark in 1990. It was declared 12th among all buildings and the best architectural design of all schools. 10,000 people attended the opening in 1938. 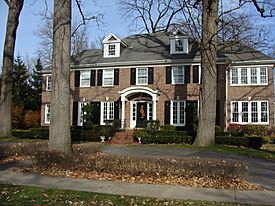 The house featured in the Home Alone and in the beginning of Home Alone 2: Lost in New York films

In 1965, Martin Luther King, Jr. spoke in Winnetka. A plaque dedicated to him is on the Village Green, a park in the town, where he spoke. As a result of Dr. King's open housing campaign and the North Shore Summer Project, the nonprofit now known as Open Communities was founded.

A song named "Big Noise from Winnetka" was recorded in 1938 by The Bobcats.

Winnetka was named number 4 on the list of America's 25 top-earning towns by CNN Money in 2007.

The film Home Alone and the beginning of Home Alone 2: Lost in New York are both filmed in Winnetka at 671 Lincoln Avenue, home to the starring character Kevin (played by Macaulay Culkin). However, in the film, the street was named "Lincoln Boulevard".

Numerous other films have been shot in Winnetka, including portions of films Ocean's 12, Breakfast Club, National Lampoon's Vacation, Ferris Bueller's Day Off, Sixteen Candles, Risky Business, Planes, Trains & Automobiles, She's Having a Baby and Uncle Buck. The film Contagion was filmed in the area in the spring of 2011.

A popular TV series, Sisters (1991–1996), was set primarily in Winnetka, but was not filmed there, except for some exterior establishing shots.

The characters on the TV series The League reside in Winnetka.

The TV series I Didn't Do It is set in Winnetka. The characters attend the fictional Ditka High School.

"Big Noise from Winnetka," a jazz standard, has been featured in a number of Hollywood movies including Let's Make Music and Reveille with Beverly.

All content from Kiddle encyclopedia articles (including the article images and facts) can be freely used under Attribution-ShareAlike license, unless stated otherwise. Cite this article:
Winnetka, Illinois Facts for Kids. Kiddle Encyclopedia.