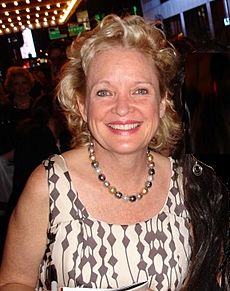 Christine Ebersole (born 21 February, 1953) is an American singer, actress and musician. She played Evelyn Tracy in Black Sheep (1996) and Muffin in the comedy The Big Wedding (2013). In 2007 she won the Tony Award for Best Actress in a Musical for her work in Grey Gardens.

Ebersole was born in Winnetka, Illinois. She now lives near Maplewood, New Jersey.

All content from Kiddle encyclopedia articles (including the article images and facts) can be freely used under Attribution-ShareAlike license, unless stated otherwise. Cite this article:
Christine Ebersole Facts for Kids. Kiddle Encyclopedia.