Richie Rich (stylized as Ri¢hie Ri¢h) is a 1994 American comedy film directed by Donald Petrie and based on the character of the same name created by Alfred Harvey and Warren Kremer. The film was distributed by Warner Bros. under their Warner Bros. Family Entertainment label. The film stars Macaulay Culkin (in his final film as a child actor until he grows up as an adult actor in 2003), John Larroquette, Edward Herrmann, Jonathan Hyde, and Christine Ebersole, while Reggie Jackson, Claudia Schiffer, and Ben Stein appear in cameo roles. Culkin's younger brother, Rory Culkin, played the part of Young Richie Rich. In theaters, the film was shown with a Wile E. Coyote and the Road Runner cartoon called Chariots of Fur, and it was followed by the direct-to-video sequel Richie Rich's Christmas Wish.

Richie Rich is the world's richest boy, the son of billionaire businessman and philanthropist Richard Rich. Richie has only his loyal butler Herbert Cadbury as a companion, and lacks any friends his own age. At a dedication to the reopening of United Tool, a factory Richard recently acquired (intending to modernize the factory and give it away to the workers as a token of goodwill) Richie encounters a group of sandlot kids playing baseball. Unfortunately, before he is able to talk to them, the overly-strict head of security, Ferguson, stops Richie and sharply pulls him away. Cadbury, ever the "third parent", reprimands Ferguson for his excessively-physical treatment of Richie.

Richard tries to spend time with his son whenever he can, but is usually busy. Hence, the family's chief scientist Professor Keenbean has invented a cellular-phone-like machine called the "Dadlink" that pinpoints Richard's location in seconds, so that Richie can talk to his dad whenever he's away on business. Meanwhile, the greedy CFO of Rich Industries Lawrence Van Dough is plotting to steal the Rich financial fortune, believed to be stored in the Rich family vault. Van Dough, with the help of Ferguson, plots to blow up the plane carrying the Rich family to England.

After a failed attempt on Richie's part to make friends with the sandlot kids, Cadbury makes a suggestion to Richie's mother Regina and arranges for Richie to stay home in Chicago for a weekend of fun with the sandlot kids. That weekend allows Richie to earn the friendship of the sandlot kids — most importantly, the assertive Gloria Koscinski. Cadbury also begins to fall for Gloria's pleasantly-outspoken mother, Diane.

During the plane trip to England, the bomb is detected. Richard is able to toss it out his window, but the bomb detonates while still near the plane, destroying part of the tail, sending Billion Dollar One into the Bermuda Triangle. Richard and Regina survive the crash and float on a life raft. Believing that Richie's parents are dead, Van Dough assumes leadership of the Rich corporation, and proceeds to cut the many charitable contributions the Rich family were known for. This includes closing the recently reopened United Tool factory, which the parents of the sandlot kids relied upon for their income. This angers Richie, and so with the encouragement and assistance of Cadbury, he proceeds to the company headquarters and, as a living Rich family member, assumes the leadership position.

Van Dough, however, sees this as a minor setback: as Richie is still underage, his ability to run the business is limited by the powers given to him by someone who was able to give it to him – namely, Cadbury. Cadbury is framed for the Rich family's apparent murder when bomb parts are found in his room, and most of the Rich family's other loyal servants are fired en masse by Van Dough's edict. Van Dough plots to have Cadbury murdered in jail and make it look like he killed himself. With Professor Keenbean eavesdropping on their conversation, he manages to sneak Richie out and enact a successful plan to help Cadbury escape from prison just as a hulking hitman arrives to murder Cadbury; though bruised, Cadbury is able to knock out the hitman. Cadbury and Richie then make their way to Gloria's house, where Diane tends to Cadbury, and Richie uses Gloria's computer to hack into the Dadlink's mainframe at Rich Manor.

During this time, Van Dough finds out about Cadbury's escape and, with Ferguson's help, confronts Keenbean. They tie the professor up and threaten him with his own invention, the molecular reorganizer which uses nuclear plasma technology to transform matter into a different form. Keenbean states that the lock to the Rich family vault is voice-activated by Richard and Regina. In the Bermuda Triangle, Richard manages to send out a distress code on his repaired Dadlink, but the signal is intercepted by Ferguson, who disconnects Richie's modem from the phone line and then informs Van Dough that Richie's parents are alive.

After rescuing Keenbean from captivity, the children and Diane manage to sneak both Richie and Cadbury back into Rich Manor, only to discover that the Dadlink shows that Richie's parents are inside Rich Manor. He is shocked to discover that Van Dough had anticipated his own arrival, and had arranged for his parents' rescue. Held at gunpoint, Van Dough forces the Rich family elders to reveal the location of the Rich vault, while Ferguson and his partner take Richie and his friends to the molecular reorganizer. Once in the lab, Keenbean manages to subdue both Ferguson and his partner with the world's stickiest substance named cementia, but ends up stuck as well; thinking cleverly, he uses a remote to power a robotic bee he created to sting Ferguson, causing him to crash into the machine's emergency off button, and thus saving Richie and the others.

Van Dough is eventually led to Mount Richmore, a gigantic mountainside-sculpture of the three Rich members' heads where the vault is located. There, he is furious when he sees that the vault holds the Rich family's most precious memories and keepsake treasures — but nothing that is valuable monetarily; all their money is in banks, the stock market, and real estate. Desperate to get the money, he attempts to shoot Richard and Regina, only for Richie to appear in the nick of time and interfere. Van Dough attempts to shoot Richie instead, but manages to barely faze him (because of a special spray of Professor Keenbean's which makes any fabric bulletproof). The Rich family manages to get away and the chase leads them down the side of the mountain, where they are under further attack by Ferguson and a rock-blasting laser that had originally been used to sculpt the mountain/vault. Cadbury finally succeeds in disarming Ferguson, while Van Dough ends up hanging upside down for dear life after Cadbury blasts away the rock-face near him with the laser. Although Richard has never fired any of his employees ever, he allows Richie to fire Van Dough, who is then subsequently punched by Regina.

Later, Richie plays baseball with his new friends for the United Tool team on the Rich Manor's yard, with Cadbury as team coach and Keenbean as umpire. He hits a home run, which is picked up by Van Dough, who is gardening with Ferguson as part of their work release and subsequently tosses the baseball into the fountain in humiliated resentment. Richard and Regina blissfully state that Richie now really is the richest boy in the world, as he has found the one thing that money can't buy: true friendship. 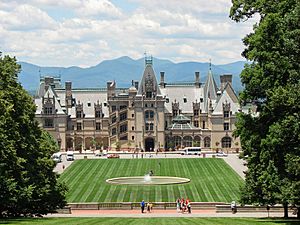 Biltmore Estate, where many of the scenes were filmed.

Though set in Chicago, the house and grounds at which most of Richie Rich is filmed are those of the Biltmore Estate in Asheville, North Carolina. Some scenes, however, are filmed in Chicago, including a fencing scene filmed at DePaul University's Cortelyou Commons. The roller coaster in the backyard is the former stand-up roller coaster Iron Wolf at Six Flags Great America. In contrast to the famous publication and animated series, a few characters are eliminated to accommodate the movie: among them are Irona the robot maid.

Data East was one of few regular pinball companies that manufactured custom pinball games e.g. for the movie Richie Rich. This pinball machine was based on The Who's Tommy Pinball Wizard machine.

All content from Kiddle encyclopedia articles (including the article images and facts) can be freely used under Attribution-ShareAlike license, unless stated otherwise. Cite this article:
Richie Rich (film) Facts for Kids. Kiddle Encyclopedia.