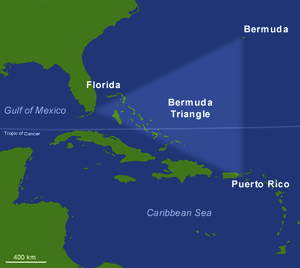 The Bermuda Triangle, sometimes called the Devil's Triangle, is an area in the western part of the North Atlantic Ocean. The weather above the Bermuda triangle always remain misty and cloudy, except for some short periods during summer.

Aircraft and boats are said to have disappeared in the triangle. Some people think this is because of paranormal or extraterrestrial beings. Many of the incidents were false. Some people believe that insurance companies charge higher premiums for shipping in this area, but that is not true.

The Ellen Austin supposedly came across a derelict ship, placed on board a prize crew, and attempted to sail with it to New York in 1881. According to the stories, the derelict disappeared; others elaborating further that the derelict reappeared minus the prize crew, then disappeared again with a second prize crew on board. A check from Lloyd's of London records proved the existence of the Meta, built in 1854 and that in 1880 the Meta was renamed Ellen Austin. There are no casualty listings for this vessel, or any vessel at that time, that would suggest a large number of missing men were placed on board a derelict that later disappeared.

The incident resulting in the single largest loss of life in the history of the US Navy not related to combat occurred when the collier USS Cyclops, carrying a full load of manganese ore and with one engine out of action, went missing without a trace with a crew of 309 sometime after March 4, 1918, after departing the island of Barbados. Although there is no strong evidence for any single theory, many independent theories exist, some blaming storms, some capsizing, and some suggesting that wartime enemy activity was to blame for the loss. In addition, two of Cyclops's sister ships, Proteus and Nereus were subsequently lost in the North Atlantic during World War II. Both ships were transporting heavy loads of metallic ore similar to that which was loaded on Cyclops during her fatal voyage. In all three cases structural failure due to overloading with a much denser cargo than designed is considered the most likely cause of sinking. 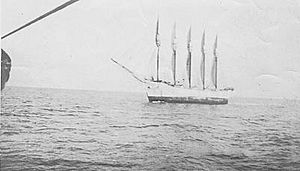 Schooner Carroll A. Deering, as seen from the Cape Lookout lightvessel on January 29, 1921, two days before she was found deserted in North Carolina. (US Coast Guard)

A five-masted schooner built in 1919, the Carroll A. Deering was found hard aground and abandoned at Diamond Shoals, near Cape Hatteras, North Carolina, on January 31, 1921. Rumors and more at the time indicated the Deering was a victim of piracy, possibly connected with the illegal rum-running trade during Prohibition, and possibly involving another ship, SS Hewitt, which disappeared at roughly the same time. Just hours later, an unknown steamer sailed near the lightship along the track of the Deering, and ignored all signals from the lightship. It is speculated that Hewitt may have been this mystery ship, and possibly involved in the Deering crew's disappearance. 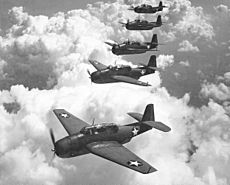 US Navy Avengers, similar to those of Flight 19

Flight 19 was a training flight of five TBM Avenger torpedo bombers that disappeared on December 5, 1945, while over the Atlantic. The squadron's flight plan was scheduled to take them due east from Fort Lauderdale for 141 miles, north for 73 miles, and then back over a final 140-mile leg to complete the exercise. The flight never returned to base. The disappearance is attributed by Navy investigators to navigational error leading to the aircraft running out of fuel.

One of the search and rescue aircraft deployed to look for them, a PBM Mariner with a 13-man crew, also disappeared. A tanker off the coast of Florida reported seeing an explosion and observing a widespread oil slick when fruitlessly searching for survivors. The weather was becoming stormy by the end of the incident. According to contemporaneous sources the Mariner had a history of explosions due to vapour leaks when heavily loaded with fuel, as it might have been for a potentially long search-and-rescue operation.

G-AHNP Star Tiger disappeared on January 30, 1948, on a flight from the Azores to Bermuda; G-AGRE Star Ariel disappeared on January 17, 1949, on a flight from Bermuda to Kingston, Jamaica. Both were Avro Tudor IV passenger aircraft operated by British South American Airways. Both planes were operating at the very limits of their range and the slightest error or fault in the equipment could keep them from reaching the small island.

On December 28, 1948, a Douglas DC-3 aircraft, number NC16002, disappeared while on a flight from San Juan, Puerto Rico, to Miami. No trace of the aircraft or the 32 people on board was ever found. A Civil Aeronautics Board investigation found there was insufficient information available on which to determine probable cause of the disappearance.

On August 28, 1963, a pair of US Air Force KC-135 Stratotanker aircraft collided and crashed into the Atlantic. The Triangle version (Winer, Berlitz, Gaddis) of this story states that while the two aircraft did collide and crash, there were two distinct crash sites, separated by over 160 miles (260 km) of water. However, Kusche's research showed that the unclassified version of the Air Force investigation report stated that the debris field defining the second "crash site" was examined by a search and rescue ship, and found to be a mass of seaweed and driftwood tangled in an old buoy.

A pleasure yacht was found adrift in the Atlantic south of Bermuda on September 26, 1955; it is usually stated in the stories (Berlitz, Winer) that the crew vanished while the yacht survived being at sea during three hurricanes. The 1955 Atlantic hurricane season shows Hurricane Ione passing nearby between the 14th and 18th of that month, with Bermuda being affected by winds of almost gale force. In his second book on the Bermuda Triangle, Winer quoted from a letter he had received from Mr J.E. Challenor of Barbados:

On the morning of September 22 Connemara IV was lying to a heavy mooring in the open roadstead of Carlisle Bay. Because of the approaching hurricane, the owner strengthened the mooring ropes and put out two additional anchors. There was little else he could do, as the exposed mooring was the only available anchorage. ... In Carlisle Bay, the sea in the wake of Hurricane Janet was awe-inspiring and dangerous. The owner of Connemara IV observed that she had disappeared. An investigation revealed that she had dragged her moorings and gone to sea.

All content from Kiddle encyclopedia articles (including the article images and facts) can be freely used under Attribution-ShareAlike license, unless stated otherwise. Cite this article:
Bermuda Triangle Facts for Kids. Kiddle Encyclopedia.