Glencoe is a village in northeastern Cook County, Illinois, United States. As of the 2020 census, the total population was 8,849. Glencoe is located on Chicago's North Shore and is located within the New Trier High School District. Glencoe has the eighth highest income per household in the U.S. among municipalities with greater than 2,000 homes.

Glencoe is located on the west side of Lake Michigan. It is separated from suburbs on the north and west by over 1,200 acres (490 ha) of the Cook County Forest Preserve natural forest area. Three golf clubs also buffer it, with the private Lake Shore Country Club on the north, the public Glencoe Golf Club (operated by the village of Glencoe) on the northwest, and the private Skokie Country Club on the west. The village is surrounded on three sides by upper income communities, with Highland Park on the north, Northbrook on the west, and Winnetka to the south. The Skokie Lagoons are located in the forest preserve to the immediate west of the village. The same forest preserve has a bicycle trail that connects to other forest preserves to the south. In the village, the Greenbay Trail allows bicyclists to travel as far south as Wilmette and north past Lake Forest. The highest point of elevation in Glencoe is 690 feet (210 m) above sea level along Green Bay Road in the northern part of the village.

There were 2,499 family households, out of which 44.6% had children under the age of 18 living with them, 75.4% were headed by married couples living together, 5.9% had a female householder with no husband present, and 17.1% were non-families. Approximately 15.2% of all households were made up of individuals, and 7.9% were someone living alone who was 65 years of age or older. The average household size was 2.89, and the average family size was 3.23.

Opinion about the origins of the village's name is divided; some attribute it to an early resident, Matthew Coe; others say it is named for the area of Scotland of the same name: the village's first seal was based on the seal of Glencoe, Scotland. 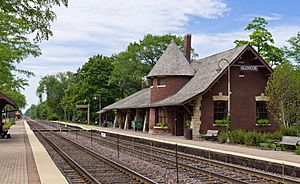 Glencoe has a Village Manager form of government. It had one of the first public safety departments (combined police/fire/paramedic). It adopted the first zoning code in Illinois in 1921. Its land-use plan adopted in 1940 has been adhered to with minor changes since then. Most all nonconforming uses have been eliminated through attrition and developed to allowed uses outlined on the 1940 zoning map. It is predominantly a single-family residential area, with no industrial uses. It has a small cohesive central business district that provides most basic services, including post office, library, Village Hall, performing arts theatre, train station (to Chicago), and other shopping needs.

In the last 20 years the village has experienced increasing tear-downs of smaller homes that have been replaced with larger homes, spurring debate on historic preservation, the impact of an increasingly wealthy demographic and rising property taxes. During this time major reconstruction has been completed of its street and sidewalk network. The business district has had brick sidewalks and period street lights installed. Many public buildings have been or are being remodelled or expanded, including the public schools, Village Hall, library, Park District Community Center, and refrigerated outdoor ice rink. The building housing the Glencoe Woman's Club (formerly Woman's Library Club) is currently being torn down and will be replaced by a new Jeanne Gang–designed building that will house Writers Theatre, beginning in 2016. The private golf clubs (Lake Shore Country Club and Skokie Country Club) have seen major remodeling, additions, and reconstruction.

Glencoe was the setting for the 1983 film Risky Business, starring Tom Cruise. However, the picture was actually filmed in neighboring Highland Park. Scenes from the 1986 John Hughes film Ferris Bueller's Day Off were filmed in Glencoe, as were scenes from Sixteen Candles. The Glencoe train station is featured in scenes from Clint Eastwood's Flags of Our Fathers, as well as John Hughes' She's Having a Baby. Glencoe in the 1970s and 1980s is recalled as the backdrop of the coming of age memoir Lake Effect, by author Rich Cohen, introducing his readers to his famous "Jamie Drew" character, based on the real-life exploits of fellow native and Renaissance man Mark Varouxakis. The basis of the plot for the film Mean Girls is primarily focused on the North Shore, with the well-known reference to Glencoe in the quote "You Go Glen-Coco". In the action-based drama series Covert Affairs on USA Network, August "Auggie" Anderson revealed in his polygraph that he is from Glencoe. The 2011 film Contagion (featuring Gwyneth Paltrow, Kate Winslet, Jude Law and Matt Damon) has scenes that were filmed in Glencoe.

All content from Kiddle encyclopedia articles (including the article images and facts) can be freely used under Attribution-ShareAlike license, unless stated otherwise. Cite this article:
Glencoe, Illinois Facts for Kids. Kiddle Encyclopedia.