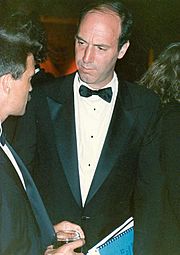 Eugene Kal "Gene" Siskel (January 26, 1946 – February 20, 1999) was an American movie critic and journalist for the Chicago Tribune. Along with his friend Roger Ebert, with Ebert they hosted a popular review show Siskel & Ebert At the Movies from 1975 until his death in 1999.

Siskel was born in Chicago, Illinois and was educated at Yale University. Siskel was married to Marlene Iglitzen in 1980 until his death, they had 3 children; Kate, Calie, and Will. Siskel died from complications from surgery to remove a brain tumor in Evanston, Illinois, aged 53. He is buried at Westlawn Cemetery.

All content from Kiddle encyclopedia articles (including the article images and facts) can be freely used under Attribution-ShareAlike license, unless stated otherwise. Cite this article:
Gene Siskel Facts for Kids. Kiddle Encyclopedia.