The Last Emperor facts for kids 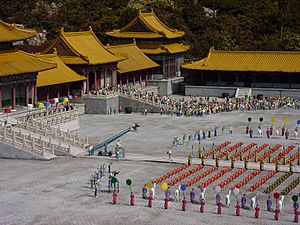 Filming of The Last Emperor in the Forbidden City, 1:25 scale miniature

The Last Emperor is a historical movie released in 1987.

The movie follows the life of Pu Yi, who was the last emperor of the Qing Dynasty.

This movie was a collaboration by Italy, China, and Britain.

All content from Kiddle encyclopedia articles (including the article images and facts) can be freely used under Attribution-ShareAlike license, unless stated otherwise. Cite this article:
The Last Emperor Facts for Kids. Kiddle Encyclopedia.