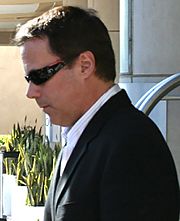 Richard Roeper (born October 17, 1959 in Chicago, Illinois) is an American movie critic, television personality, journalist, and historian. He starred on the American television program "At the Movies" with Roger Ebert from 2000 to 2008 as Gene Siskel's successor. Roeper also writes about movies for an American newspaper, the Chicago Sun-Times.

All content from Kiddle encyclopedia articles (including the article images and facts) can be freely used under Attribution-ShareAlike license, unless stated otherwise. Cite this article:
Richard Roeper Facts for Kids. Kiddle Encyclopedia.