Kids Encyclopedia Facts
This page is about the founder of Leo Burnett Company. For US Army colonel and founder of Student Doctor Network, see Lee Burnett.

Leo Burnett (October 21, 1891 – June 7, 1971) was an American advertising executive and the founder of Leo Burnett Company, Inc. He was responsible for creating some of advertising's most well-known characters and campaigns of the 20th century, including Tony the Tiger, the Marlboro Man, the Maytag Repairman, United's "Fly the Friendly Skies", and Allstate's "Good Hands", and for garnering relationships with multinational clients such as McDonald's, Hallmark and Coca-Cola. In 1999, Burnett was named by Time as one of the 100 most influential people of the 20th century.

Leo Burnett was born in St. Johns, Michigan, on October 21, 1891 to Noble and Rose Clark Burnett. Noble ran a dry goods store and as a young man, Burnett worked with his father, watching Noble as he designed ads for the business. After high school, Burnett went on to study journalism at the University of Michigan and received his bachelor's degree in 1914.

Burnett's first job after college was as a reporter for the Peoria Journal Star in Peoria, Illinois. In 1917 he moved to Detroit and was hired to edit an in-house publication for Cadillac Motor Car Company, Cadillac Clearing House, later becoming an advertising director for that institution. At Cadillac, Burnett met his advertising mentor, Theodore F. MacManus, whom Burnett called "one of the great advertising men of all time". MacManus ran the agency that handled Cadillac's advertising.

In 1918, Burnett married Naomi Geddes. The couple met at a restaurant near the Cadillac offices, where Naomi was a cashier. They went on to have three children: Peter, Joseph and Phoebe.

During World War I, Burnett joined the Navy for six months. His service was mostly at Great Lakes building a breakwater. After the USN, Burnett returned to Cadillac. A few employees at Cadillac formed the LaFayette Motors Company – triggering Burnett to move to Indianapolis to work for the new firm. Soon he was offered a position with Homer McKee. He then left LaFayette and joined McKee, where Burnett said of the founder, "(He) gave me my first feel of what I have come to regard as the "warm sell" as contrasted to the "hard sell" and "soft sell". This was his first agency job.

After spending a decade at McKee's, and working through the stock market crash of 1929, Burnett left the company. In 1930, he moved to Chicago and was hired by Erwin, Wasey & Company, where he was employed for five years.

In 1935, Burnett founded the Leo Burnett Company, Inc. Later, the operation moved to the 18th floor of the London Guarantee Building. Today, the agency has 9,000+ employees in over 85 offices globally.

In December 1967, nearing the end of his career, Burnett delivered his "When To Take My Name Off The Door" speech at the agency's holiday gathering.

On June 7, 1971, Burnett went to his agency, pledging to colleagues to work three days per week due to health problems. That evening, at age 79, he died of a heart attack at his family farm in Hawthorn Woods, Illinois. He is buried at Rosehill Cemetery in Chicago.

A private company formed in 1935 and officially running under the name of 'Leo Burnett Company, Inc.', the agency started with working capital of $50,000, eight employees and three clients. Now a part of Publicis Groupe, Leo Burnett is one of the largest agency networks with 85 offices in 69 countries and 9,000+ employees. 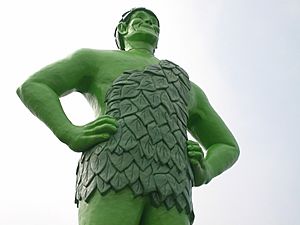 Burnett used dramatic realism in his advertising, the Soft sell approach to build brand equity. Burnett believed in finding the "inherent drama" of products and presenting it in advertising through warmth, shared emotions and experiences. His advertising drew from heartland-rooted values using simple, strong and instinctive imagery that talked to people. He was also known for using "cultural archetypes" in his copy, by creating mythical creatures that represented American values. This is evident on such campaigns as Jolly Green Giant, Pillsbury Doughboy, Tony the Tiger and more famously the Marlboro Man. Indeed, these campaigns played on the 1950s attitudes towards masculinity that pervaded his campaigns.

Burnett was known for keeping a folder in the lower left-hand corner of his desk called "Corny Language". He collected words, phrases, and analogies that struck him as being particularly apt in expressing an idea.

In 1947, Burnett wrote The Good Citizen, a booklet concerning the duties and privileges of being a U.S. citizen. This was done as a public service for The Advertising Council and The American Heritage Foundation.

All content from Kiddle encyclopedia articles (including the article images and facts) can be freely used under Attribution-ShareAlike license, unless stated otherwise. Cite this article:
Leo Burnett Facts for Kids. Kiddle Encyclopedia.