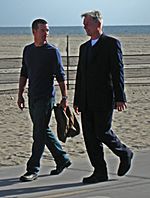 O'Donnell and Mark Harmon filming in 2009

Christopher Eugene "Chris" O'Donnell (born June 26, 1970) is an American movie, television, stage, and voice actor. He is known for his roles in NCIS: Los Angeles, Batman & Robin, Batman Forever, Scent of a Woman, and in Vertical Limit.

O'Donnell was discovered when he was cast in a McDonald's commercial, in which he served Michael Jordan.

He was born on June 26, 1970 in Winnetka, Illinois. He has been married to Caroline Fentress since 1997. They have five children.

All content from Kiddle encyclopedia articles (including the article images and facts) can be freely used under Attribution-ShareAlike license, unless stated otherwise. Cite this article:
Chris O'Donnell Facts for Kids. Kiddle Encyclopedia.