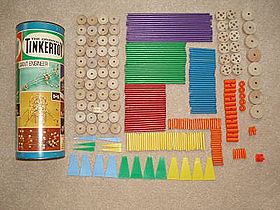 The Tinkertoy Construction Set is a toy construction set for children. It was created in 1914—six years after the Frank Hornby's Meccano sets—by Charles H. Pajeau, who formed the Toy Tinker Company in Evanston, Illinois to manufacture them. Pajeau, a stonemason, designed the toy after seeing children play with sticks and empty spools of thread. Pajeau partnered with Robert Pettit and Gordon Tinker to market a toy that would allow and inspire children to use their imaginations. After an initially slow start, over a million were sold.

The cornerstone of the set is a wooden spool roughly two inches (5 cm) in diameter, with holes drilled every 45 degrees around the perimeter and one through the center. Unlike the center, the perimeter holes do not go all the way through. With the differing-length sticks, the set was intended to be based on the Pythagorean progressive right triangle.

The sets were introduced to the public through displays in and around Chicago which included model Ferris wheels. Tinkertoys have been used to create complex machines, including Danny Hillis's tic-tac-toe-playing computer (now in the collection of the Computer History Museum in Mountain View, California) and a robot at Cornell University in 1998.

One of Tinkertoy’s distinctive features is the toy’s packaging. Initially, the mailing tube design was chosen to reduce shipping costs. Early versions of the packaging included an address label on the tube with space for postage. To assist consumers in differentiating between the various offerings, sets were placed in mail tube packages of different sizes and also delineated with a number (e.g.: 116, 136) and a name (e.g.: major, prep, big boy, junior, grad). A colorful "how-to" instruction guide accompanied each set. In the 1950s, color was added and the wooden sticks appeared in red, green, blue, and yellow.

Tinkertoys were inducted into the National Toy Hall of Fame at The Strong in Rochester, New York, in 1998.

In addition to the spools, a standard Tinkertoy set includes:

Spools and pulleys all have a single groove around the outside; "Part W" has two parallel grooves.

Sticks (or "rods") are slotted on each end, both to provide some "give" when inserted into snug-fitting holes, and to allow thin cards, flags, and strings to be inserted into the slots. They are color-coded by size; in the 1960s-era sets, they were, in order from shortest to longest, orange, yellow, blue, red, green, and violet. Each successively longer rod is (with allowances for the size of the spools) next smaller size times the square root of two; thus any two of the same size will combine with one of the next size up, and three spools, to form an isosceles right triangle (45°–45°–90°).

Most of the larger sets also include a driveshaft (an unfinished wooden rod without slotted ends, of an intermediate length between "green" and "violet," normally turned with a small plastic crank.

The Ultra Construction Set also includes connectors, small cylindrical plastic pieces approximately 2 inches long with a slot in either end and a slotted hole crosswise through the center of the part.

All content from Kiddle encyclopedia articles (including the article images and facts) can be freely used under Attribution-ShareAlike license, unless stated otherwise. Cite this article:
Tinkertoy Facts for Kids. Kiddle Encyclopedia.