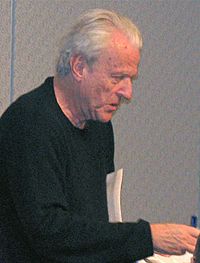 William Goldman (August 12, 1931 – November 16, 2018) was an American novelist, playwright, and screenwriter. He was born in Chicago, Illinois. He won two Academy Awards for his screenplays for Butch Cassidy and the Sundance Kid (1969) and again for All the President's Men (1976).

His other written works include his thriller novel Marathon Man and comedy-fantasy novel The Princess Bride, both of which Goldman made into a movie.

All content from Kiddle encyclopedia articles (including the article images and facts) can be freely used under Attribution-ShareAlike license, unless stated otherwise. Cite this article:
William Goldman Facts for Kids. Kiddle Encyclopedia.