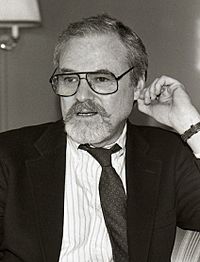 Alan Jay Pakula (April 7, 1928 – November 19, 1998) was an American movie director, writer and producer. He was nominated for three Academy Awards: Best Picture for To Kill a Mockingbird (1962), Best Director for All the President's Men (1976) and Best Adapted Screenplay for Sophie's Choice (1982). He was also known for his movies Klute and The Parallax View.

Pakula was killed in a car accident in Melville, New York, aged 70.

All content from Kiddle encyclopedia articles (including the article images and facts) can be freely used under Attribution-ShareAlike license, unless stated otherwise. Cite this article:
Alan J. Pakula Facts for Kids. Kiddle Encyclopedia.