Ancient and Honorable Artillery Company of Massachusetts facts for kids 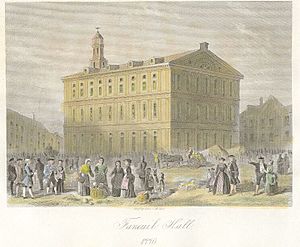 Faneuil Hall in 1776. The Artillery Company is headquartered on the fourth floor of Faneuil Hall.

The Ancient and Honorable Artillery Company of Massachusetts is the oldest chartered military organization in North America and the third oldest chartered military organization in the world. Its charter was granted in March 1638 by the Great and General Court of Massachusetts Bay and signed by Governor John Winthrop as a volunteer militia company to train officers enrolled in the local militia companies across Massachusetts. With the professionalization of the US Military preceding World War I including the creation of the National Guard of the United States and the federalization of officer training, the company's mission changed to a supportive role in preserving the historic and patriotic traditions of Boston, Massachusetts, and the Nation. Today the Company serves as Honor Guard to the Governor of Massachusetts who is also its Commander in Chief. The headquarters is located on the 4th floor of Faneuil Hall and consists of an armory, library, offices, quartermaster department, commissary, and military museum with free admission.

First Town-House, Boston where the AHAC would meet.

Colonel Thomas Crafts, Jr., a member of the AHAC

As the settlements which followed the landing at Plymouth increased and spread, there was no organized military force for protection — only local volunteer companies, which lacked the capacity for joint action or any centralized authority. The English Government had no standing army, with the only permanent force (other than Royal bodyguards) being the locally organised Militia, in which all able males between 16 and 60 were liable to serve as required for home defence. This part-time force was extended to the New World colonies following the settlement of Virginia in 1607 and its offshoot Bermuda in 1609–1612, and to other colonies as they were established. Many of the settlers of Boston had been members in England of the Honourable Artillery Company (HAC) of London, and the military training they had received in that company led them to form a similar organization in the new country. In 1637 the company was formed as a citizen militia for instruction in military discipline and tactics. Robert Keayne and many of the original members of the Ancient and Honorable Artillery Company had been members of the original HAC of London.

Governor Winthrop granted a charter on March 13, 1638, and on the first Monday in June following, an election of officers was held on Boston Common. The original name of the company was "The Military Company of Massachusetts". It began to be referred to as "The Ancient and Honorable Artillery Company" in the year 1737.

Among the charter members was Nicholas Upsall, who later forsook his membership to join the Quakers. Since that time, the company has continued to hold their annual elections on the Boston Common on the first Monday in June by casting their votes on a drum head. Company membership has long been considered a distinction among the New England gentry in a similar manner to which regimental membership conferred distinction on the sons of the English gentry. The Honourable Artillery Company of London and the Ancient and Honorable Artillery Company of Massachusetts acknowledge and celebrate their common historical roots.

Since 1746, the headquarters of the company has been located in Faneuil Hall. In this armory, the company maintains a military museum with free admission and library containing relics from every war the United States has fought since its settlement. The armory is open to the public daily.

The company reenacts the election of officers every 1st Monday in June (June Day Parade). A parade consisting of the AHAC, Massachusetts National Guard (MANG), members of the USS Constitution, Washington Light Infantry (South Carolina), and other historic military groups from across New England participate in the parade from Faneuil Hall to Boston Common. On occasion, members of the Honorable Artillery Company of London participate. A representative of the Swiss Guard may also be in attendance. Upon the arrival of the Governor of the State of Massachusetts, the MANG will fire a cannon volley. During the reenactment ceremony, the Governor will accept resignations of the Captain Commanding, and 1st and 2nd Lieutenants. New commissions will be issued by the Governor.

Membership in the company has traditionally been selected from the upper middle and upper classes of Boston society. In recent decades membership has been expanded to include those from outside of Massachusetts. It is common for senior officers in the Massachusetts National Guard to be members of the company. Although prior military service is not a requirement for membership, about one third of the current (2014) members of the Company have served in the Armed Forces of the United States, in most cases as commissioned officers.

Prior to the late 20th Century, the membership of the company was almost exclusively Anglo-Americans. In recent decades, however, the company has recruited a more diverse membership.

Individuals who are descendants of members of the Company who joined prior to 1738 may join as members by right of descent. Members by Right of Descent have discounted membership fees but may not vote or hold office in the company. Members by Right of Descent residing in New England are enrolled as full (regular) members and pay full dues. In rare cases, honorary membership is extended to highly distinguished individuals.

The company has had ten members who were awarded the Medal of Honor (three of whom are still living), and has also had four members who served as President of the United States: Presidents James Monroe, Chester A. Arthur, Calvin Coolidge and John F. Kennedy. Honorary membership was also extended to Prince Albert, King Edward VII and King George V. A number of Governors of Massachusetts have also been members of the company.

In 2012, the organization voted to induct its first woman members. Lieutenant Colonel Catherine M. Corkery and Colonel Christine Hoffmann, both officers in the Massachusetts National Guard, were inducted into the organization on September 17, 2012. 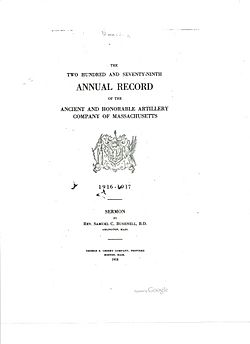 Presidents of the United States

All content from Kiddle encyclopedia articles (including the article images and facts) can be freely used under Attribution-ShareAlike license, unless stated otherwise. Cite this article:
Ancient and Honorable Artillery Company of Massachusetts Facts for Kids. Kiddle Encyclopedia.