Roanoke County is a county located in the U.S. state of the Commonwealth of Virginia. As of the 2010 census, the population was 92,376. Its county seat is Salem, but the chief administrative offices are located in the unincorporated Cave Spring area of the county.

Roanoke County is part of the Roanoke, VA Metropolitan Statistical Area and located within the Roanoke Region of Virginia.

The independent cities of Roanoke and Salem (incorporated as such in 1884 and 1968 respectively) are located within the boundaries of Roanoke County, but are not a part of the county. The town of Vinton is the only municipality within the county. While significant areas of the county are rural and mountainous, most residents live in the suburbs near Roanoke and Salem in the Roanoke Valley. 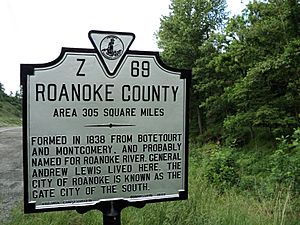 The county was established by an act of the Virginia Legislature on March 30, 1838 from the southern part of Botetourt County. It was named for the Roanoke River, which in turn was derived from a Native American term for money. Additional territory was transferred to Roanoke County from Montgomery County in 1845. Salem was originally the county seat. When Salem became an independent city, by agreement with the county the Roanoke County Courthouse remained in Salem and the two localities share a jail. However, the County Administrative Offices were moved to the Cave Spring District.

The county is governed by a Board of Supervisors with one representative elected from each of the five magisterial districts: Catawba, Cave Spring, Hollins, Vinton, and Windsor Hills. Vinton is an incorporated town with an elected town council and town manager.

There are five high schools located in Roanoke County:

All content from Kiddle encyclopedia articles (including the article images and facts) can be freely used under Attribution-ShareAlike license, unless stated otherwise. Cite this article:
Roanoke County, Virginia Facts for Kids. Kiddle Encyclopedia.