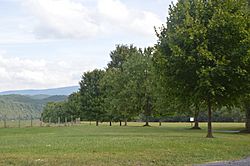 Fort Lewis was originally settled by Colonel Charles Lewis more than two centuries ago in present day Bath County, Virginia. In 1750 he built a small stockade to protect the strategic western end of the Shenandoah Mountain pass from Indian raids. One of a series of fortifications authorized by the Virginia Colonial General Assembly along the frontier during the French & Indian War. Col. Lewis went on to die a hero's death fighting the Shawnee, allies of the British, in the 1774 Battle of Point Pleasant, now widely regarded as the first conflict of the American Revolution. His vast 3,200 acre mountain farm, still known as Fort Lewis Farm, has remained relatively unchanged over its 200-year history.

In the 1740s Virginia frontiersmen found herds of buffalo roaming in fertile grounds of the Cowpasture River Valley. The Shawnee had long since cleared these fields and regarded them as sacred hunting grounds. Early settlers introduced domestic livestock and small grains but found hemp to be the most valuable crop. Descendants of Col. Lewis managed the plantation for over a century. By 1850 the Lewis family had diverted water from the river and built a gristmill to service the plantation and neighboring farms. The Cowden family purchased Fort Lewis Farm in 1959 and brought a herd of registered Black Angus cattle to the valley. Today the Cowden family continues to oversee the farming operation and also manages Fort Lewis Lodge, a full-service country inn with miles of river for trout and bass fishing, a classic swimming hole, extensive hiking trails, mountain biking, and magnificent vistas. The gristmill has been faithfully reconstructed and now serves as the main dining room.

Fort Lewis was listed on the National Register of Historic Places in 2019.

All content from Kiddle encyclopedia articles (including the article images and facts) can be freely used under Attribution-ShareAlike license, unless stated otherwise. Cite this article:
Fort Lewis, Virginia Facts for Kids. Kiddle Encyclopedia.