The Massanutten Military Academy is located in Woodstock, as is the national headquarters of Sigma Sigma Sigma sorority. Woodstock is also home to the River Bandits of the Valley League.

The town was established by charter in March 1761 as a part of what was then Frederick County. It was originally formed by a land grant from Lord Fairfax, and founded as Muellerstadt (Miller Town) in 1752 after founder Jacob Miller. The town's charter was sponsored by George Washington in Virginia's House of Burgesses. Woodstock has been the County Seat of Shenandoah County, since the County's formation in 1772. 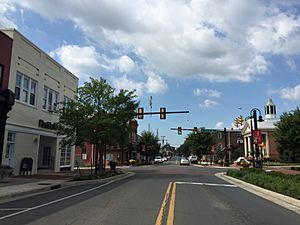 In the late 1770s, John Muhlenberg was pastor at a Lutheran church located in the heart of Woodstock. As a famous story of Muhlenberg has it, at conclusion of his farewell sermon on January 21, 1776, Muhlenberg threw off his clerical robes to reveal an officer's uniform beneath and shouted, "there is a time to pray and a time to fight..." With that declaration, the story says he then called for volunteers to join the 8th Virginia Regiment under his command.

In 1795, the courthouse, designed by Thomas Jefferson, was built using native limestone. The courthouse, located on Main Street, is the oldest courthouse still in use west of the Blue Ridge Mountains.

Lantz Hall and the Shenandoah County Courthouse are listed on the National Register of Historic Places.

There were 1,685 households out of which 25.7% had children under the age of 18 living with them, 46.6% were married couples living together, 11.6% had a female householder with no husband present, and 38.9% were non-families. 33.6% of all households were made up of individuals and 18.3% had someone living alone who was 65 years of age or older. The average household size was 2.17 and the average family size was 2.76.

According to the United States Census Bureau, the town has a total area of 3.2 square miles (8.4 km²), all of it land.

The climate in this area is characterized by hot, humid summers and generally mild to cool winters. According to the Köppen Climate Classification system, Woodstock has a humid subtropical climate, abbreviated "Cfa" on climate maps.

All content from Kiddle encyclopedia articles (including the article images and facts) can be freely used under Attribution-ShareAlike license, unless stated otherwise. Cite this article:
Woodstock, Virginia Facts for Kids. Kiddle Encyclopedia.