Discovery Park of America is a museum and heritage park located in Union City, Tennessee. The park sits on 50 acres (20 ha) of land off of Everett Boulevard, near the proposed Interstate 69. It features exhibits and activities on local history, nature, military history, art and science.

After the Vision Team made its initial plans, Canadian architect Douglas Cardinal was selected to design the new facility as well as its exhibits. The Vision Team wished for the community to be involved in the project and designated eighteen committees, composed primarily of local volunteers. Thirteen of these committees were responsible for the development of the galleries and exhibits within the museum, while five were responsible for the commercial aspects, such as accounting and marketing. Kirkland chose the name Discovery Park of America for the new facility, and asked his lifelong friend and another local businessman, Jim Rippy, to volunteer and serve as chairman of the newly developed Discovery Park of America board of directors. 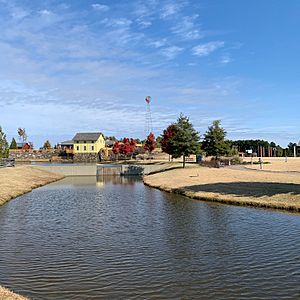 The North grounds of the heritage park.

Allen Searcy Building Contractors was hired as the principal construction contractor and a groundbreaking ceremony was held on July 1, 2008 in a soybean field on the northwest edge of Union City. At this time, the park was set for completion in 2010. However, on July 8, 2009, Kirkland terminated Douglas Cardinal and construction was halted as the search began for a new architect. Months earlier, Obion County Museum board-member Polly Brasher, who by then was working as the Discovery Park of America Founding Director, had met Kurt Cederquest of Maltbie Exhibit Fabricators at a trade show in Philadelphia, Pennsylvania and mentioned the project. After hearing of Cardinal's dismissal, Cederquest contacted his colleagues at Verner Johnson Museum Architects of Boston and Thinc Design of New York City to persuade them to collaborate with him on the project. The three firms made a joint pitch to Discovery Park of America which resulted in a contract in January 2010, and construction resumed on the project in December. Lou Sirianni of Verner Johnson Museum Architects was selected to design the main building, while Tom Henness of Thinc Design would oversee the design of the exhibits and gallery spaces. Kirkland instructed the teams, "design a building that will stop traffic at 70mph." The building also had to include an observation tower and a grand hall. Construction continued for nearly three years. In addition to the main building, Richie Smith Landscape Architects of Memphis, Tennessee was hired to design the 50-acre heritage park surrounding the central museum, which includes two small lakes connected by a moat and a terraced series of weirs.

The site sits directly adjacent to the future Interstate 69 corridor and will be connected by exits immediately North and South of the park. The future interstate is meant to connect Canada to Mexico through Texas, Louisiana, Arkansas, Tennessee, Kentucky, Indiana, and Michigan. Union City and Discovery Park sit near the halfway point between these destinations, and the potential tourism catalyzed by the eventuality of a major roadway was taken into consideration when choosing the site of the park, as it would make day trips from St. Louis, Memphis, Evansville, and dozens of rural counties more convenient.

In January 2013, Jim Rippy retired from his position at an insurance company and joined Discovery Park full-time as Chief Executive Officer and expanded the staff to fill opening niches as the project neared completion. Donors, sponsors, and long-time supporters were invited to preview the park on October 15, 2013. The park opened to the public with a ribbon cutting ceremony on November 1, 2013. The design and construction had taken nearly ten years and cost approximately $80 million. The Robert E. and Jenny D. Kirkland Foundation was founded as a trust, assuring a provision of $3 million annually for a period of 20 years.

On December 31, 2018, Jim Rippy retired as chief executive officer, and Scott Williams was selected as his successor. Williams, a native of West Tennessee, is the former CEO of the Newseum in Washington, D.C. He also worked with Elvis Presley Enterprises, Inc. for 12 years as part of the management team at Graceland in Memphis.

During the COVID-19 pandemic in the spring of 2020, Discovery Park closed to protect its guests and employees from the spread of the disease. The park plans to reopen to its members on May 30 and to the general public on June 1. In the meantime, park staff have shared educational and motivational content via social media. The park hosts a semester-long Historical Theater Academy twice a year, and the spring 2020 sessions are being conducted online. The park maintains an official website, a Facebook page, an Instagram, and a YouTube channel with which to share updates on the status of reopening, as well as educational content.

In December 2020, Discovery Park intends to unveil a new permanent exhibit in the Ag Center on the north side of the park. The exhibit is titled AgriCulture: Innovating for our Survival, and will discuss innovative techniques in the agriculture industry from the first to last step of the process. CEO Scott Williams released a statement saying, "We're calling this a 'mind-blowing, myth-busting farming exhibit that will change the world' and we're certain that after they experience our exhibit, guests will have a much better understanding of how food and fiber get from the farm to the family."

Discovery Park hosts the podcast series Reelfoot Forward: A West Tennessee Podcast, which focuses on the culture and history of West Tennessee. In each episode, CEO Scott Williams interviews a notable guest from fields such as history, education, agriculture, sports, business, and other areas.

The park's central building, Discovery Center, is a three-floor 100,000 sq ft (9,300 m2) facility that is divided into 9 permanent exhibit galleries, a traveling exhibit hall, a theater, an observation tower, a cafe, a gift shop, and 3 programming and event spaces. The building contains 2,000 tons of steel and is built atop 1,056 geopiers, making it resistant to the occasional small earthquakes in the area.

The 9 permanent exhibit galleries within Discovery Center are: 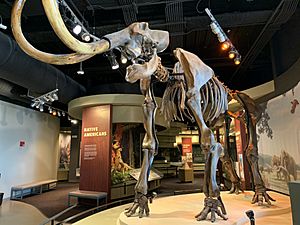 In addition to the permanent galleries, the ATA Traveling Exhibit Hall has hosted a number of temporary traveling exhibits, including Titanic: The Artifact Exhibition, Bodies Revealed, Jurassic Journeys, Da Vinci Machines and Robotics, the Science of Rock n' Roll, LEGO: Towers of Tomorrow, and the current traveling exhibit, Astronaut, which explores life aboard the International Space Station.

Cooper Tower, the observation tower accessible through Dinosaur Hall, is a 120 ft observation deck that overlooks the Heritage Park and Union City. On a clear day, one can see for approximately 12 miles on the horizon.

Sabin's Cafe, near the front entrance of Discovery Center, is named after Verne and Nonie Sabin, who brought Reelfoot Lake to the national spotlight in the 1920s by publishing their photographs of the area.

Outside of Discovery Center lies the remainder of the 50 acre heritage park, which includes 8 exhibit areas, a hedge maze, 4 gardens, and 2 lakes.

The 7 outside exhibit areas are:

All content from Kiddle encyclopedia articles (including the article images and facts) can be freely used under Attribution-ShareAlike license, unless stated otherwise. Cite this article:
Discovery Park of America Facts for Kids. Kiddle Encyclopedia.