Union City is a city located in Obion County, Tennessee, United States. The 2010 census reported the population of the town as 10,895. Union City is the principal city of the surrounding micropolitan area, which includes Obion County and Fulton County, Kentucky.

Union City is recognized for the following: It was the site of a minor battle in the American Civil War in March 1864, and it was the site of a Goodyear Tire and Rubber Company/Goodyear Tire plant, which generated a large amount of the city's economy. It is also the hometown of both Congressman, John S. Tanner and Jerry L. Gurien, the inventor of stone washed jeans and Gurien Finishing Corp., which developed a process in the 1980s that stone-washed jeans and denims.

The Discovery Park of America serves as a major attraction in the state of Tennessee and is located within city limits. It was founded by Robert Kirkland and opened its doors in 2013. Union City is approximately 30–45 minutes from Reelfoot Lake. This well-known lake was formed from the 1811–12 New Madrid earthquakes and is a popular recreational boating and fishing location in the state. Union City is also approximately 15–20 minutes from the University of Tennessee at Martin.

The city name was derived from its location at the junction of two railroads, with one running roughly east-west and the other roughly north-south.

There were 4,568 households out of which 29.7% had children under the age of 18 living with them, 44.6% were married couples living together, 15.1% had a female householder with no husband present, and 36.4% were non-families. 32.7% of all households were made up of individuals and 15.1% had someone living alone who was 65 years of age or older. The average household size was 2.30 and the average family size was 2.89.

Union City is served by the newspaper The Messenger (Union City Daily Messenger), by the TV station WOBT, and by the following radio stations:

Union City is the home of the Masquerade Theatre, headquartered in the former Capital Theater on South First Street. It is known for producing theatrical productions for 16 years including musicals, comedies, dramas, children's plays, workshops, and concerts. Masquerade Theatre has already presented many successful and sold out productions including Joseph and the Amazing Technicolor Dreamcoat, and Annie (musical). This theatre is a historic landmark and has been standing since the early 1900s.

The Jerry Gurien mansion is also a landmark of Union City. The 21 acre estate was built by the stone washed jeans inventor in 1988 and is located at 1707 E. Reelfoot Ave. 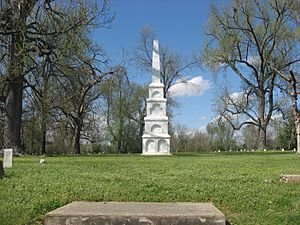 (From a historic marker entering the cemetery.) This 1869 memorial to unknown Confederate dead is one of the oldest Civil War monuments in Tennessee and is a rare example of Reconstruction-era memorialization. After the end of the war, local women raised funds to disinter the bodies of Confederate soldiers from throughout the county and rebury them here. Some of the men had died at nearby Camp Brown, a training camp, while others had belonged to the 7th Tennessee Cavalry. On October 21, 1869, the Union City brass band led a procession here for the dedication ceremony.

Union City is also the home of the first monument ever dedicated to an "Unknown Soldier" as well as the first monument to a Confederate soldier in the South. It was erected in 1869. Only two graves in the cemetery surrounding the monument are occupied by the remains of known persons. The rest of the graves are the remains of unknown soldiers gathered from around the county and reburied in the Confederate cemetery.

All content from Kiddle encyclopedia articles (including the article images and facts) can be freely used under Attribution-ShareAlike license, unless stated otherwise. Cite this article:
Union City, Tennessee Facts for Kids. Kiddle Encyclopedia.