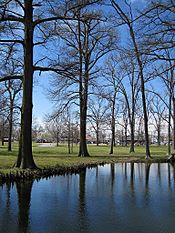 Obion County is a county located in the northwest corner of the U.S. state of Tennessee. As of the 2010 census, the population was 31,807. The county seat is Union City. The county was formed in 1823 and organized in 1824. It was named after the Obion River.

Obion was established in 1823 and organized the following year. It was named for the Obion River, which flows through the county and is a tributary of the nearby Mississippi River. The word "Obion" is believed to be derived from a Native American word meaning "many forks."

Residents of the county's unincorporated communities have the option of paying $75 per year if they want firefighting services from the city of South Fulton.

All content from Kiddle encyclopedia articles (including the article images and facts) can be freely used under Attribution-ShareAlike license, unless stated otherwise. Cite this article:
Obion County, Tennessee Facts for Kids. Kiddle Encyclopedia.