Weakley County is a county located in the northwest of the U.S. state of Tennessee. As of the 2010 census, the population was 35,021. Its county seat is Dresden, and its largest city is Martin, the home of the University of Tennessee at Martin. The county was established by the Tennessee General Assembly on October 21, 1823, and is named for U. S. Congressman Robert Weakley (1764–1845).

Weakley County was established in 1823. The county was the state's largest corn producer during the 19th century, though soybeans became the county's leading crop in the latter half of the 20th century. 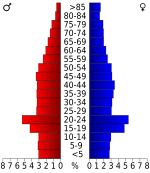 All content from Kiddle encyclopedia articles (including the article images and facts) can be freely used under Attribution-ShareAlike license, unless stated otherwise. Cite this article:
Weakley County, Tennessee Facts for Kids. Kiddle Encyclopedia.