Kids Encyclopedia Facts
Not to be confused with Dyer, Tennessee.

Dyer County is a county located in the westernmost part of the U.S. state of Tennessee. As of the 2010 census, the population was 38,335. Its county seat is Dyersburg.

Dyer County was founded by a Private Act of Tennessee, passed on October 16, 1823. The area was part of the territory in Tennessee that was previously legally occupied by Chickasaw Native American people ("Indian Lands").

The county was named for Robert Henry Dyer (circa 1774—1826). Dyer had been an army officer in the Creek War and War of 1812, and a cavalry colonel in the First Seminole War of 1818 before becoming a state senator. He was instrumental in the formation of the counties of Dyer and Madison County, Tennessee.

On April 2, 2006 a severe weather system passed through Dyer County, producing tornadoes that killed 16 in the county and 24 in Tennessee.

The county is drained by the Mississippi River, which forms its western boundary. It is in the part of Tennessee called the "Mississippi bottomland".

Dyer County is bisected by U.S. Route 51, the older major highway connecting Memphis with Chicago from south to north. When upgraded to interstate standards, this road will become Interstate 69. To the west, Dyer County is connected to Missouri by Interstate 155 over the Mississippi River, providing the only highway connection, other than those at Memphis, between Tennessee and the states to the west of the river. 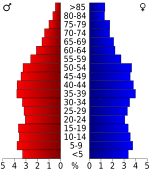 All content from Kiddle encyclopedia articles (including the article images and facts) can be freely used under Attribution-ShareAlike license, unless stated otherwise. Cite this article:
Dyer County, Tennessee Facts for Kids. Kiddle Encyclopedia.