Dyersburg is a city and the county seat of Dyer County, Tennessee, in the United States. It is located in northwest Tennessee, 79 miles (127 km) northeast of Memphis on the Forked Deer River. The population was 17,145 at the 2010 census. Dyersburg and Dyer County offer many amenities including quality schools, a low crime rate, moderate climate, low cost of living, and close proximity to area recreation. Dyersburg is a regional retail, medical, employment and cultural center for more than 300,000 people who live in Tennessee, Arkansas and Missouri.

The lands that make up Dyer County once belonged to the Chickasaw people. The final treaty by which they relinquished all of West Tennessee was signed in 1818. Dyersburg was a steamboat town with economic growth coming up the Forked Deer River from the Mississippi River.

In 1823 the Tennessee General Assembly passed an act to establish two new counties immediately west of the Tennessee River, Dyer County being one of them. John McIver and Joel H. Dyer donated 60 acres (240,000 m2) for the new county seat, named Dyersburg, at a central location within the county known as "McIver's Bluff". In 1825, Dyer surveyed the town site into 86 lots. The first courthouse was built on the square in 1827. The current Classical Revival-style courthouse, designed by Asa Biggs in 1911, centers a downtown historic district listed in the National Register of Historic Places.

Situated as the hub of steamboat navigation on the Forked Deer River, Dyersburg grew as a river town, especially once the Grey Eagle made the first successful steamboat trip in 1836. The county's first industrial boom dates to 1879, when the steamboat Alf Stevens shipped timber from A. M. Stevens Lumber Company of Dyersburg to St. Louis, Missouri markets. The Stevens company established a large sawmill in 1880 and opened a planing mill in 1885. The Bank of Dyersburg opened in 1880, while another timber industry, Nichols & Co. Wooden Bowl Factory, began operations in 1881.

The arrival of the Newport News and Mississippi Valley Railroad in 1884 further expanded market possibilities; a branch line, the Dyersburg Northern, soon linked the county seat to Tiptonville. The new railroad links encouraged the creation of new industries and businesses. In 1884, for example, investors established the Dyersburg Oil Company, a cottonseed factory. This company remained locally important through the twentieth century.

Between 1909 and 1914, Dyersburg emerged as a regional railroad hub as it became the junction point for three different lines, led by the Illinois Central Railroad. 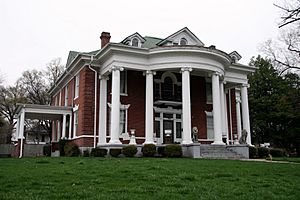 The Edward Moody King House is on the National Register of Historic Places.

During World War II, an emergency landing strip was built in Dyersburg. Industry continued to expand and Dyer County became a regional medical, educational, retail and distribution center. The establishment of Dyersburg State Community College in 1969 enhanced educational and cultural opportunities in the county.

In the last two decades, two major highway projects have modernized the city's transportation system: Interstate 155 links Dyersburg with Caruthersville, Missouri, via the Caruthersville Bridge, the only highway bridge over the Mississippi River between Cairo, Illinois, and Memphis. The four-lane expansion of U.S. 412 connects Dyersburg to Interstate 40 at Jackson.

In 1967 Sidney Poitier and Rod Steiger began filming In the Heat of the Night with plans to shoot for three days in Dyersburg. The filming sequence, including the slap scene, needed a location with an actual cotton plantation. The mansion in Dyersburg was to be used as the plantation owner's home. The filmmakers bought furniture and a lawn jockey to make the home appear to be more aristocratic, along with $15,000 worth of orchids. With tension in the air, actor Poitier slept with a gun under his pillow at the Dyersburg Holiday Inn. When local hooligans created threatening circumstances in the parking lot of his motel, the film production left Dyersburg immediately and fled to Illinois to complete the filming. The movie earned Oscar nominations.

Dyersburg was mentioned in the lyrics of the song "Tennessee", written and performed by the 1990s hip hop group Arrested Development.

On September 17, 2003, Harold Kilpatrick Jr. took 15 people hostage in an upper story classroom at Dyersburg State Community College. Kilpatrick suffered from severe schizophrenia and paranoia and was not on appropriate medications. His only demands into the sixth hour were six pizzas and 24 sodas. After nine hours or more, a shot was heard inside the classroom, prompting the Dyersburg police to forcibly enter the room and open fire, killing Kilpatrick and wounding two students. Hostages from that day described Kilpatrick as being rather friendly, though nervous, and that he had dropped his gun causing an accidental discharge (the shot the police heard).

In May 2011, after flood waters surged into the Mississippi Delta, the U.S. Army Corps of Engineers shored up levees on "The Great River Road". The U.S. Coast Guard closed a section of the flooded Mississippi River to barge traffic in southeast Missouri. The President of the United States declared a major disaster for Tennessee on May 4, 2011. Dyersburg Mayor John Holden estimated a total of $140,000 in damages occurring within Dyersburg. The worst flooding in Dyer County occurred south of Dyersburg.

In 2012 FEMA (Federal Emergency Management Agency) awarded over 2 million dollars for the construction of area safe rooms. The safe rooms in Dyersburg are located beside Dyersburg High School and across from Fire Station 1 in Downtown.

Under the new ownership of CEO A. G. Helton, the Dyersburg Mall began renovations in January 2013.

The 2011 McIver's Grant Public Library project was launched, and in 2011 the city of Dyersburg and the members of the Library Board and Foundation Board celebrated the ribbon cutting for the new facility.

New renovations of Dyersburg High School were completed and the on-campus tornado shelter, which accommodates 1,300 people, has been designed to sustain an F2 tornado. Dyersburg has 19 outdoor emergency sirens.

The Tennessee Aviation Association, a division of the Tennessee Department of Transportation, recognized the Dyersburg Regional Airport with the 2015 Award of Excellence for most improved airport.

The newly completed Port of Cates Landing, located on the Mississippi River north of Tiptonville in Lake County, is the nation's newest multimodal inland port. The port, engineered by Forcum-Lannom of Dyersburg, will accommodate year-round modern barge traffic. The Northwest Tennessee Regional Port Authority received $13 million from the US Department of Transportation.

The city of Dyersburg created a Non-Emergency 311 Call Center to assist residents with local government service requests and general information.

There were 7,036 households out of which 31.5% had children under the age of 18 living with them, 42.4% were married couples living together, 17.9% had a female householder with no husband present, and 35.8% were non-families. 30.9% of all households were made up of individuals and 13.1% had someone living alone who was 65 years of age or older. The average household size was 2.39 and the average family size was 2.99.

The nearest Amtrak service is in Newbern.

All content from Kiddle encyclopedia articles (including the article images and facts) can be freely used under Attribution-ShareAlike license, unless stated otherwise. Cite this article:
Dyersburg, Tennessee Facts for Kids. Kiddle Encyclopedia.