Not to be confused with the state capital, Charleston, West Virginia. For other cities of this name, see Charlestown (disambiguation).

Charles Town, officially the City of Charles Town, is a city in Jefferson County, West Virginia, and is also the county seat. The population was 5,259 at the 2010 United States Census. 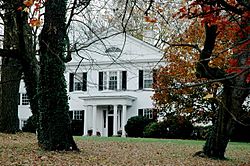 "Charlestown" was established by an act of the Virginia General Assembly in January 1787.

Charles Washington, the founder of Charles Town, was born in Hunting Creek, now Fairfax County, Virginia on May 2, 1738. He was the youngest full brother of George Washington. He came to present Jefferson County between April and October 1780. The estate of Charles Washington, Happy Retreat, was erected in 1780. In 1786, on 80 acres (320,000 m²) of his adjoining land, Charles laid out the streets of Charles Town, naming many of them after his brothers and one after his wife, Mildred. He donated the four corner lots at the intersection of George and Washington Streets for public buildings of the town and county, provided the town become the seat of the county separated from Berkeley County.

Jefferson County was formed in 1801 as Charles Washington had anticipated. The county court house stands on one of the lots he donated, as did the jail until 1919 when it was demolished to be replaced by the post office.

Charles Washington died sometime between July and September, 1799, only a short while before the death of his brother George. Charles' and his wife Mildred's grave sites near Evitts Run have recently been located and surrounded by a stone wall.

On October 16, 1859, abolitionist John Brown and his followers raided the Federal arsenal at nearby Harpers Ferry, seven miles east of Charles Town. The insurrection was ultimately put down and John Brown was tried for treason in the town's Jefferson County court house. On December 2, 1859, he was hanged in Charles Town at the Gibson-Todd House, which is listed on the National Register of Historic Places.

In 1883, the Valley Telephone Company was incorporated in West Virginia and began installing telephone lines throughout Jefferson County. The company's main office was in Charles Town.

In 1922, William Blizzard, a leader of striking coal miners, was charged with treason and murder for engaging in warfare against state and federal troops in Mingo and Logan counties. He was tried in the Jefferson county courthouse in Charles Town and was found not guilty.

In 1999, the Charles Town Race Track underwent major renovation which included a large addition to house video slot machines. It was renamed Charles Town Races & Slots and now attracts many visitors each week from the nearby Baltimore and Washington D.C. metropolitan areas.

In 2006, a non-profit corporation, called the Friends of Happy Retreat, Inc. (FOHR), purchased an option to buy the former home of Charles Washington outright. The goal of this group is to see Happy Retreat preserved as a national historic treasure while at the same time contributing to the public’s appreciation of the arts, local culture, and the rich history of the Washington family and the Eastern Panhandle of West Virginia. FOHR hosts a special tour of Happy Retreat along with other Washington Family Homes during the annual Charles Town Heritage Festival which occurs the third Saturday of September. The Gavin family, the current owners of Happy Retreat, have placed the mansion on the market to sell.

Due to its low elevation, Charles Town is on the northern extent of the Humid Subtropical climate zone, having cool to mildly cold winters and hot and humid summers. Precipitation is evenly distributed throughout the year, providing lush, abundant plant growth.

There were 2,011 households of which 37.2% had children under the age of 18 living with them, 47.3% were married couples living together, 11.1% had a female householder with no husband present, 5.7% had a male householder with no wife present, and 35.9% were non-families. 28.7% of all households were made up of individuals and 10.1% had someone living alone who was 65 years of age or older. The average household size was 2.57 and the average family size was 3.19.

There were 1,285 households out of which 25.8% had children under the age of 18 living with them, 39.5% were married couples living together, 13.5% had a female householder with no husband present, and 43.0% were non-families. 36.0% of all households were made up of individuals and 19.4% had someone living alone who was 65 years of age or older. The average household size was 2.26 and the average family size was 2.95.

All content from Kiddle encyclopedia articles (including the article images and facts) can be freely used under Attribution-ShareAlike license, unless stated otherwise. Cite this article:
Charles Town, West Virginia Facts for Kids. Kiddle Encyclopedia.