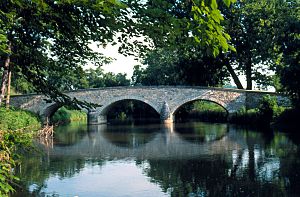 Burnside's Bridge traversing Antietam Creek near Sharpsburg, Maryland, site of heavy combat during the Battle of Antietam (Sharpsburg) on September 17, 1862

Antietam Creek is a 41.7-mile-long (67.1 km) tributary of the Potomac River located in south central Pennsylvania and western Maryland in the United States, a region known as the Hagerstown Valley. The creek became famous as a focal point of the Battle of Antietam during the American Civil War.

The creek is formed in Franklin County, Pennsylvania, at the confluence of the West and East Branches of Antietam Creek, about 2.3 miles (3.7 km) south of Waynesboro, Pennsylvania. Welty's Mill Bridge crosses the East Branch of Little Antietam at Washington Township in Franklin County, Pennsylvania. The stream runs for about 0.5 miles (0.80 km) upon its entering Washington County, Maryland. The course proceeds southward in a meandering pattern, and the creek empties into the Potomac south of Sharpsburg about 50 miles (80 km) upstream of Washington.

The watershed area is 290 square miles (750 km2) and includes parts of Franklin County (106 mi2) and Washington County (185 mi2). Major tributaries in Pennsylvania include the East and West Branches, Red Run and Falls Creek. Major tributaries in Maryland include Little Antietam Creek, Beaver Creek, and Marsh Run. Communities in the watershed include Waynesboro in Pennsylvania; and Boonsboro, Funkstown, Hagerstown, Mount Aetna, Sharpsburg and Smithsburg in Maryland. 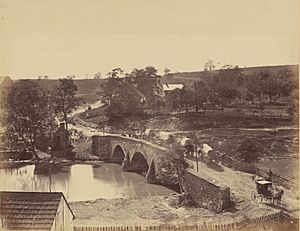 The creek is noted for numerous well-preserved stone arch bridges dating to the 19th century that still traverse the creek, the most famous of which is the 125-foot-long (38 m) Burnside's Bridge in the Antietam National Battlefield.

The creek was a major topographic feature during the Battle of Antietam or Sharpsburg, fought on September 17, 1862, near the creek's mouth. Burnside's Bridge became a major focus of combat as Union forces under General Ambrose Burnside repeatedly tried to capture the bridge from Confederate forces guarding the crossing from a high bluff overlooking the creek. The day of the battle is known as "the day Antietam Creek ran red" due to the blood of thousands of Union casualties mixing with the creek waters. Both sides lost about a fourth of their number but, despite General McClellan's refusal to press on his attacks, it served as a tactical Union victory, as Lee was forced to withdraw from Maryland.

All content from Kiddle encyclopedia articles (including the article images and facts) can be freely used under Attribution-ShareAlike license, unless stated otherwise. Cite this article:
Antietam Creek Facts for Kids. Kiddle Encyclopedia.