Smithsburg is a town in Washington County, Maryland, United States. The population was 2,975 at the 2010 census. Smithsburg is close to the former Fort Ritchie army base and just west of the presidential retreat Camp David.

Smithsburg, MD was founded in 1813 by Christopher "Stuffle" Smith. Mr. Smith purchased a plot of land formerly known as "part of Shadrack's Lot." The community's development was directly influenced by factors such as migration paths, the arrival of the railroad, and advances in agricultural technology. By 1923, much of the existing village had been erected. Smithsburg was incorporated in 1846.

Smithsburg acted as a hospital town during the American Civil War in 1862, treating wounded soldiers from nearby battles at South Mountain and Antietam. On July 5, 1863, Confederate General James Stuart and Union General Kilpatrick exchanged artillery fire over Smithsburg. Kilpatrick continued the advance to Boonsboro, Maryland after the engagement on July 6. area.

President Lyndon Johnson, his wife Lady Bird Johnson, and their daughter Lynda Bird Johnson, visited St. Ann's Episcopal Church in Smithsburg on Easter Sunday, March 26, 1967. During his term President Johnson visited Smithsburg many times due to its close proximity to Camp David. In 1963, President and First Lady Johnson were on their way from Camp David to a Church in Hagerstown, Maryland. Along their route was a junkyard known as "Elwoods Auto Exchange" which the first lady felt "ruined the beautiful landscape". She requested the driver pull the limousine onto the shoulder of the road. She then marched up the dirt road to the main office and proceeded to give Elwoods Grimm "a piece of her mind regarding the unsightliness of the wrecking yard." Two years following this occurrence the Highway Beautification Act was passed by Congress. The Auto Exchange is still in operation and is now hidden by a line of pine trees which blocks its view from the main highway. While there is no documentation of Lady Bird's rant, several documents are available through the Lyndon Baines Johnson Library and Museum which show her acknowledgements of the unsightliness of the Auto Exchange.

Smithsburg is characterized by rolling hills and open space. The town is well known for its farming community, including apple orchards and dairy farms.

Due to Smithsburg's location between the Appalachian Mountains and the Chesapeake Bay watershed, its climate is considered mild to moderate. The area has warm, humid summers and winters with temperatures hovering around freezing point.

There were 1,012 households, of which 49.8% had children under the age of 18 living with them, 59.8% were married couples living together, 13.9% had a female householder with no husband present, 4.4% had a male householder with no wife present, and 21.8% were non-families. 18.6% of all households were made up of individuals, and 6.7% had someone living alone who was 65 years of age or older. The average household size was 2.94 and the average family size was 3.35. 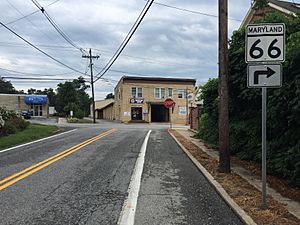 All content from Kiddle encyclopedia articles (including the article images and facts) can be freely used under Attribution-ShareAlike license, unless stated otherwise. Cite this article:
Smithsburg, Maryland Facts for Kids. Kiddle Encyclopedia.