Boonsboro is a town in Washington County, Maryland, United States, located at the foot of South Mountain. It nearly borders Frederick County and is proximate to the Antietam National Battlefield. The population was 3,336 at the 2010 census.

Local lore asserts Boonsboro was founded by George Boone, a cousin of Daniel Boone, and was originally named "Margaretsville" after his wife. The town was incorporated as Boonesborough in 1831. Local newspapers and villagers preferred the name Boonsboro. The former name was used on some documents as late as 1903.

Boonsboro was a key town during the American Civil War. Two battles were fought in its present borders. The town was also used to keep wounded soldiers after the Battle of Antietam in September 1862.

Boonsboro lies on what used to be the National Road. Today it is known as either the Old National Pike or Alt-U.S. 40. In Boonsboro it is Main Street.

The town suffered a fire at the former Asaro's (its successor Vesta moved to the building across) in 2007, and a fire at the former inn in 2008. That fire completely gutted the inn, which was on the verge of being renovated and reopened. The Inn BoonsBoro finally opened a year later; it is owned by best-selling romance novelist Nora Roberts.

Boonsboro is served by a 90-acre (360,000 m2) educational complex. It consists of the following schools:

The current principal of Boonsboro High School is Sherry Hamilton. 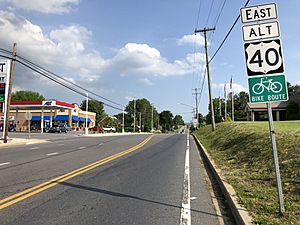 All content from Kiddle encyclopedia articles (including the article images and facts) can be freely used under Attribution-ShareAlike license, unless stated otherwise. Cite this article:
Boonsboro, Maryland Facts for Kids. Kiddle Encyclopedia.