The area, situated on fields among the Appalachian foothills near the Potomac River, features the battlefield site and visitor center, a national military cemetery, stone arch Burnside's Bridge, and a field hospital museum. 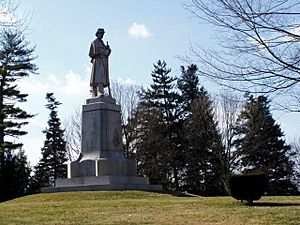 Antietam National Cemetery, which adjoins the park, covers 11.36 acres (4.60 ha) and contains more than 4,976 interments (1,836 unidentified). The cemetery was commissioned in 1865 and interments begun in 1867 after an arduous process of identifying the dead, which was only successful in about 40% of cases. Civil War era burials in this cemetery consist of only Union soldiers; Confederate dead were interred in the Washington Confederate Cemetery, Hagerstown, Maryland; Mt. Olivet Cemetery in Frederick, Maryland; and Elmwood Cemetery in Shepherdstown, West Virginia. The cemetery also contains the graves of veterans and their wives from the Spanish–American War, World War I and II, and the Korean War. The cemetery was closed to additional interments in 1953. Two exceptions have been made, the first in 1978 for Congressman Goodloe Byron and the second in 2000 for the remains of USN Fireman Patrick Howard Roy who was killed in the attack on the USS Cole. The cemetery was placed under the War Department on July 14, 1870; it was transferred to the National Park Service on August 10, 1933. The gatehouse at the cemetery's entrance was the first building designed by Paul J. Pelz, later architect of the Library of Congress 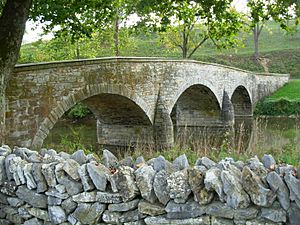 The Antietam National Battlefield Visitor Center contains museum exhibits about the battle and the Civil War. The Visitor Center was constructed in 1962 as part of the Mission 66 plan. A 26-minute orientation film narrated by James Earl Jones is shown on the hour and the half-hour. The visitor center is open seven days a week from 9:00 a.m. to 5:00 p.m. except on Thanksgiving, Christmas, and New Year's Day. Park rangers offer interpretive talks. An audio tour is available for purchase to accompany the self-guided 8.5-mile (13.7 km) driving tour of the battlefield with eleven stops. Park Grounds are open daylight hours. There is a park entrance fee of $5.00 per person (age 17 or older; 16 and under FREE) or $10.00 per vehicle. The entrance fee is valid for three days.

The Pry House Field Hospital Museum is located in the house that served as Union Commander General George B. McClellan's headquarters during the battle. Exhibits focus on period medical care of the wounded, as well as information about the Pry House. The museum is sponsored by the National Museum of Civil War Medicine. 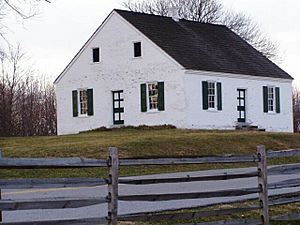 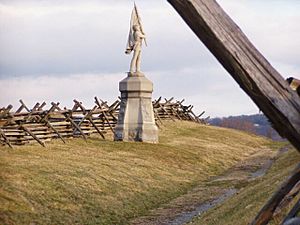 As the fighting in the cornfield was coming to a close, Maj. Gen. William H. French was moving his Federals forward to support Maj. Gen. John Sedgwick and veered into Confederate Maj. Gen. D.H. Hill's troops posted in the Sunken Road. Fierce fighting continued here for four hours before the Union troops finally took the road. 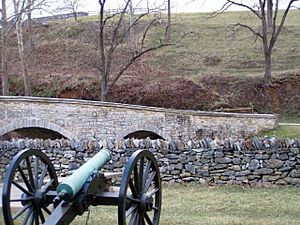 Union positions below the Confederates at Burnside Bridge

On the southeast side of town, Union Maj. Gen. Ambrose E. Burnside's XI Corps had been trying to cross Antietam Creek since mid-morning, being held up by only 500 Georgia sharpshooters. Around 1 p.m., they finally crossed Burnside's Bridge and took the heights. After a 2-hour lull to reform the Union lines, they advanced up the hill, driving the Confederates back towards Sharpsburg. But for the timely arrival of Maj. Gen. A.P. Hill's division from Harpers Ferry, Burnside would have entered Sharpsburg. Instead, the Union troops were driven back to the heights above the bridge.

The battle was over with the Union sitting on three sides, waiting for the next day. During the night of the 18th, General Lee pulled his troops back across the Potomac River, leaving the battle and the town to General McClellan.

All content from Kiddle encyclopedia articles (including the article images and facts) can be freely used under Attribution-ShareAlike license, unless stated otherwise. Cite this article:
Antietam National Battlefield Facts for Kids. Kiddle Encyclopedia.