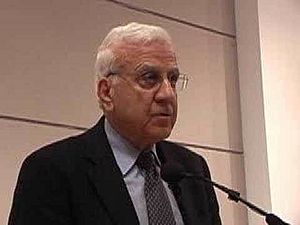 Naseer H. Aruri (7 January 1934 – 10 February 2015) was a Palestinian scholar-activist. He was an expert on Middle East politics, U.S. foreign policy in the Middle East and human rights. He was born in Jerusalem.

Aruri was a Chancellor Professor (Emeritus) of Political Science, having served on the faculty of the University of Massachusetts-Dartmouth from 1965-1998.

Aruri died of Parkinson's disease at the age of 81.

All content from Kiddle encyclopedia articles (including the article images and facts) can be freely used under Attribution-ShareAlike license, unless stated otherwise. Cite this article:
Naseer Aruri Facts for Kids. Kiddle Encyclopedia.