Fairhaven is a town in Bristol County, Massachusetts, United States. It is located on the south coast of Massachusetts where the Acushnet River flows into Buzzards Bay, an arm of the Atlantic Ocean. The town shares a harbor with the city of New Bedford, a place well known for its whaling and fishing heritage; consequently, Fairhaven's history, economy, and culture are closely aligned with those of its larger neighbor. The population of Fairhaven was 15,873 at the time of the 2010 census.

Fairhaven was first settled in 1659 as "Cushnea", the easternmost part of the town of Dartmouth. It was founded on land purchased by English settlers at the Plymouth Colony from the Wampanoag sachem Massasoit, and his son, Wamsutta. 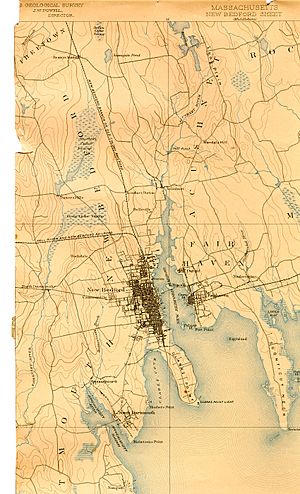 In 1787, the eastern portion of Dartmouth seceded and formed a new settlement called New Bedford. This new town included areas that are the present-day towns of Fairhaven, Acushnet, and New Bedford itself. Fairhaven eventually separated from New Bedford, and it was officially incorporated in 1812. At that time, Fairhaven included all of the land on the east bank of the Acushnet River. The northern portion of Fairhaven, upriver from Buzzards Bay, formed another independent town, called Acushnet, in 1860. Thus, what had once been a single town, Dartmouth, with a substantial land area, became, in less than 75 years, four separate municipalities. (The western portion of the original Dartmouth land-purchase eventually became a fifth town, Westport.)

Fort Phoenix (now the Fort Phoenix State Reservation) is located in Fairhaven at the mouth of the Acushnet River, and it served, during colonial and revolutionary times, as the primary defense against seaborne attacks on New Bedford harbor.

Within sight of the fort, the first naval battle of the American Revolution took place on 14 May 1775. Under the command of Nathaniel Pope and Daniel Egery, a group of 25 Fairhaven minutemen (including Noah Stoddard) aboard the sloop Success retrieved two vessels previously captured by a British warship in Buzzards Bay.

On 5 and 6 September 1778, the British landed four thousand soldiers on the west side of the Acushnet River. They burned ships and warehouses in New Bedford, skirmished at the Head-of-the-River bridge (approximately where the Main Street bridge in Acushnet is presently situated), and marched through Fairhaven to Sconticut Neck, burning homes along the way. In deference to the overwhelming force approaching from the landward side, the fort was abandoned, and it was destroyed by the enemy. An attack on Fairhaven village itself was repelled by militia under the command of Major Israel Fearing, who had marched from Wareham, some 15 miles (24 km) away, with additional militiamen. Fearing's heroic action saved Fairhaven from further molestation.

The fort was enlarged before the War of 1812, and it helped repel an attack on the harbor by British forces. In the early morning hours of 13 June 1814, landing boats were launched from the British raider, HMS Nimrod. Alerted by the firing of the guns at Fort Phoenix, the militia gathered, and the British did not come ashore.

The fort was decommissioned in 1876, and in 1926 the site was donated to the town by Cara Rogers Broughton (a daughter of Henry Huttleston Rogers). Today, the area surrounding the fort includes a park and a bathing beach. The fort lies just to the seaward side of the harbor's hurricane barrier.

Prior to the second half of the nineteenth century, whale oil was the primary source of fuel for lighting in the United States. The whaling industry was an economic mainstay for many New England coastal communities for over two hundred years. The famous whaling port of New Bedford is located across the Acushnet River from Fairhaven. Fairhaven was also a whaling port; in fact, in the year 1838, Fairhaven was the second-largest whaling port in the United States, with 24 vessels sailing for the whaling grounds. The author of Moby-Dick, Herman Melville, departed from the port of Fairhaven aboard the whaleship Acushnet in 1841.

However, once New Bedford's predominance in the whaling industry became apparent, Fairhaven's economy evolved into one that supplemented the New Bedford economy rather than competing directly with it. Fairhaven became a town of shipwrights, ship chandlers, ropemakers, coopers, and sailmakers. It also became a popular location for ship-owners and ship-captains to build their homes and raise their children. 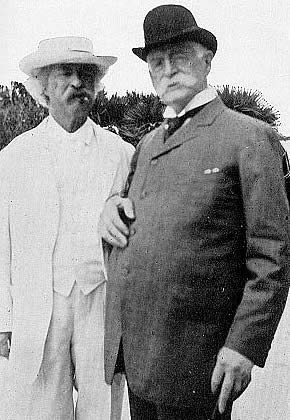 Among Fairhaven's natives was Henry Huttleston Rogers (1840–1909), who was a businessman and philanthropist. Rogers was one of the key men in John D. Rockefeller’s Standard Oil trust. He later developed the Virginian Railway. Rogers and his wife, Abbie Gifford Rogers, another Fairhaven native (who was the daughter of the whaling captain Peleg Gifford), donated many community improvements in the late-nineteenth- and early-twentieth-century, including a grammar school, an extraordinarily luxurious high school, the Town Hall, the George H. Taber Masonic Building, the Unitarian Memorial Church, the Tabitha Inn, the Millicent Library, and a modern water-and-sewer system. These structures were erected to top-quality construction standards, a trademark philosophy of Henry H. Rogers; most are still in regular use more than one hundred years later

Fairhaven's great benefactor, Henry H. Rogers, befriended a number of the high and mighty; he also became a friend, advisor, and patron to a number of the less-well-off. Among his friends were Booker T. Washington, Anne Sullivan, Helen Keller, and Mark Twain, all of whom came to visit Rogers in Fairhaven, sometimes for protracted periods.

Late in Twain's life, he had, through imprudent investments and more than a little bad luck, managed to impoverish himself. Rogers lent him a helping hand, and Twain did whatever he could to return the favors.

On 22 February 1894, the third of Rogers's great bequests to his hometown, the Fairhaven Town Hall (pictured above), was dedicated. Earlier, in 1885, Rogers had built a huge and modern (for the times) elementary school and, in 1893, a memorial to his beloved daughter, Millicent, in the form of an Italian-Renaissance palazzo that serves as the town's free public library to this day. When the Fairhaven Town Hall, a gift of Abbie Palmer (Gifford) Rogers, was dedicated, Mark Twain delivered a humorous speech to mark the occasion. Less than three months later, on 21 May 1894, Abbie Rogers died in New York following surgery for stomach cancer.

According to the United States Census Bureau, the town has a total area of 14.1 square miles (37 km2), of which 12.4 square miles (32 km2) is land and 1.7 square miles (4.4 km2), or 12.06%, is water. It is bordered by the river and New Bedford to the west, Acushnet to the north, Mattapoisett to the east and Buzzards Bay to the south. The town line with Mattapoisett lies along the Bristol and Plymouth county lines. The town is the southeastern corner of Bristol County, and contains the easternmost point of the county, on West Island. Fairhaven is approximately 54 miles (87 km) south of Boston, 21 miles (34 km) by land west of Cape Cod, and 32 miles (51 km) southeast of Providence, Rhode Island.

The town is located on Buzzards Bay, on the eastern bank of the Acushnet River at its mouth. The lands of the town jut out into the bay via Sconticut Neck and West Island, along with several other small islands. Most of the town's water area consists of its harbors, bays and coves, along with a portion of the Acushnet's waters, and Nasketucket and Scipping Creeks. The town lies along coastal plain, and has some swampland along the Nasketucket and around Boy's and Girl's Creeks, north of Priest's Cove. Fairhaven's localities include Fairhaven Center, North Fairhaven, East Fairhaven, Oxford, Poverty Point, Nasketucket, Sconticut Neck, and Winsegansett Heights. Most of the town's population lies either in the west side of town, along Sconticut Neck or in the village of East Fairhaven, with the northeast quarter of the town's land sparsely populated.

The town has two large public parks, Livesey Park and Cushman Park, as well as a number of smaller ones. Cushman Park, as well as having tennis courts and ballfields and a bandstand, is the location of Fairhaven High School's running track. The town has several commercial wharves, a yacht club, and several marinas for recreational craft. There are several small bathing beaches, the largest being the Fort Phoenix State Reservation, a south-facing beach to the east of the fort and the New Bedford Harbor Hurricane Barrier. There is also a bike path which travels along a long-unused railroad right-of-way, just to the south of Route 6.

Interstate 195 travels on an east-west path through town, crossing the Acushnet River at the point where it begins to broaden as it approaches New Bedford Harbor. Fairhaven is also crossed by U.S. Route 6, which enters the town on a bridge between the mainland and Pope's Island, which is connected to the rest of New Bedford by the New Bedford – Fairhaven Bridge, a swing-span truss bridge over one hundred years old. Massachusetts Route 240, a short, 1 mile (1.6 km) divided highway, connects Interstate 195 at Exit 18 to the intersection of Route 6 and Sconticut Neck Road. The town's retail center is located at this intersection, and includes several stores, markets, and restaurants, and is the main retail center for neighboring Acushnet and Mattapoisett as well.

SRTA provides bus service between Fairhaven and New Bedford, as well as two short shuttle routes between the town and Acushnet and Mattapoisett. The town has no rail or air service. The MBTA is in the process of extending commuter rail service to neighboring New Bedford. New Bedford also is the location of the nearest airport to Fairhaven, the New Bedford Regional Airport. The nearest national air service is at T.F. Green Airport in Rhode Island.

Fairhaven is the home of the Acushnet Company, a world-renowned manufacturer of golf equipment. Fairhaven is also home to Nye Lubricants, a firm dealing in industrial lubricants and whose history dates back to 1844.

All content from Kiddle encyclopedia articles (including the article images and facts) can be freely used under Attribution-ShareAlike license, unless stated otherwise. Cite this article:
Fairhaven, Massachusetts Facts for Kids. Kiddle Encyclopedia.