Cuttyhunk Island is the outermost of the Elizabeth Islands in Massachusetts. A small outpost for the harvesting of sassafras was occupied for a few weeks in 1602, arguably making it the first English settlement in New England. Cuttyhunk is located between Buzzards Bay to the north and Vineyard Sound to the south. Penikese Island and Nashawena Island are located to the north and east respectively.

The island has a land area of 580 acres (0.91 sq mi; 2.3 km2), and a population of 52 persons as of the 2000 census. It is the fourth largest in area of the Elizabeth Islands and home to the village of Cuttyhunk. It lies entirely within the town of Gosnold. 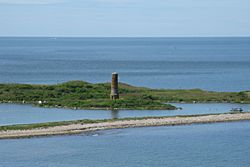 Cuttyhunk is about a mile and a half long, and three quarters of a mile wide, with a large natural harbor at the eastern end of the island. Fully half of the main part of the island is set apart as a nature preserve. It is home to a wide variety of birds such as piping plovers, least terns and Massachusetts' American oystercatchers, as well as White-tailed deer, White-footed mice, and Eastern cottontails. It also has a small population of coyotes. Cuttyhunk has most varieties of New England’s wildflowers, as well as bayberry, sweet peas, and a host of other plant life.

Two large peninsular arms extending from the main body of the island, named Canapitsit (the southern arm) and Copicut Neck (the northern arm). The shore is made up of largely of rocks, testimony to Cuttyhunk’s glacial origins. Cuttyhunk is covered with rocks and stones that are elsewhere found only in the mountains of Vermont and New Hampshire.

There are three stretches of sandy beach: along the channel that leads to the harbor (Channel Beach), around the sunken barges that connect Canapitsit to the main body of land (Barges Beach), and at “Church’s beach,” which connects Copicut to the main island. Much of Cuttyhunk’s rocky shore is bounded by steep cliffs made of rock, sand, and clay. The western end of the island is taken up by the West End Pond, much of which is currently used for shellfish farming. A monument to Bartholomew Gosnold’s 1602 landing stands on a small island in the Pond.

The highest point on the island is Lookout Hill, standing at 154 feet (47 m) above sea level. The Lookout is home to one of the six (one now buried) defensive bunkers built by the United States Coast Guard in 1941 to watch the surrounding ocean for Nazi U-boats. Stripped of their observation equipment and weaponry at the end of World War II, the bunkers are now picnic areas. They offer views of the island and its surrounding waters. The Coast Guard station has not been active since 1964.

Cuttyhunk has been a popular site for large striped bass. In 1913 Charles Church caught a world-record striped bass of 73 pounds. That record lasted many years. Charles Cinto duplicated the effort, landing a 73-pound striper near Cuttyhunk in 1967. Cuttyhunk has been the home port to many notable fishing guides. Many of these guides troll secret lures attached by stainless-steel or nickel-alloy wire along the rocky reefs near the island where large female stripers reside from the spring through the autumn. The most notable reef, Sow and Pigs Reef, was where Mr. Cinto caught his striper. 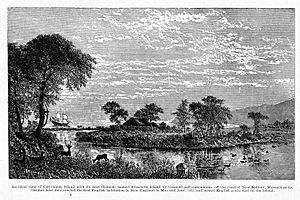 The island was originally named Poocuohhunkkunnah (probably from the Wampanoag for “Point of departure” or “Land’s end”) by the native Wampanoag tribe. In 1602 English explorer Bartholomew Gosnold renamed the island. On March 6, 1602, Gosnold set out aboard the barque The Concord from Falmouth, England to plant a colony in the New World of America. Gosnold and his men landed near Kennebunkport, Maine, then explored Cape Cod, Martha's Vineyard, and Cuttyhunk. They established a modest fort on Cuttyhunk where they planned to harvest sassafras, a valuable commodity in Europe at the time. After exploring the islands for less than a month, the men returned with The Concord to England.

In 1606 the King granted the Elizabeth Islands to the Council of New England, which dissolved in 1635. After this, they became the property of William Alexander, 1st Earl of Stirling. Sterling sold the islands to Thomas Mayhew in 1641, and in 1663 James Stuart, Duke of York assumed proprietorship over them.

In 1668, Mayhew sold Cuttyhunk to Philip Smith, Peleg Sanford, and Thomas Ward of Newport, Rhode Island. In 1688, Peleg Sanford acquired his partners’ rights in the island, and sold half of it to Ralph Earle of Dartmouth. He in turn immediately sold his property to his son, Ralph Jr., who became the island’s first permanent English settler. He and other colonists harvested the island of all of its timber, leaving it bare and wind-swept.

In 1693, Peleg Slocum purchased all of the holdings on Cuttyhunk, and became its sole owner. The Slocum family continued to live on Cuttyhunk for the next two hundred years. Several generations were slaveholders of Africans transported to the English colony for labor.

In 1858, William C.N. Swift, Thomas Nye, and Eben Perry bought Cuttyhunk from Otis Slocum for fifty dollars. In 1864, the town of Gosnold was finally incorporated. 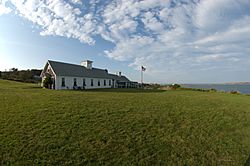 In 1864 some members of The West Island Club in Sakonnet Point, Rhode Island grew dissatisfied with that club’s regulations. They looked for a place to start their own fishing club. After a visit to Cuttyhunk, these powerful New York gentlemen decided they had found their spot. In 1865, they purchased a large portion of the island, and built 26 "fishing stands"—long, wooden platforms that stretched out from rock to rock into the surf—all around the island. They limited initial membership to fifty men, with a single negative vote of the active members sufficient to bar a man from membership. The admission fee was $300. Eventually, the membership was expanded to sixty, then seventy-five.

Each evening, the members of the Club met to draw lots to determine which fishing stand each would use the next day. Each member employed a "chummer"—a young boy paid to bait the member’s hook with lobster tail, and cast chunks of lobster into the surf to attract striped bass. They paid the chummer $1 per fish caught, or more if the fish were particularly large. Records were kept of the number, size, and location of the fish caught, and by whom. Cuttyhunk gained a reputation for being a prime location for sportfishing, especially for striped bass.

The Cuttyhunk Club gave the Cuttyhunk Church the land to build on in 1880 (the Church celebrated its 125th anniversary in the summer of 2006). Every Fourth of July, the Club would host a party for island residents, including fireworks displays. In 1921, William M. Wood bought out the Cuttyhunk Club’s interest in the island, along with any other land that was for sale. He wanted a place for his young children to summer. He invited other young, wealthy couples who were his friends to purchase summer homes on the island, to provide playmates for his children. The Wood family owns a great deal of the island to this day. Descendants of many of the families who purchased property from Wood still summer on the island annually. 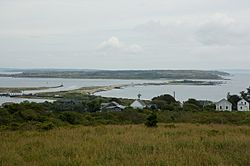 View of Cuttyhunk Island in 2006 from Lookout Hill.

The treacherous waters of the Vineyard Sound and Buzzards Bay were tricky for novices to navigate. Early on in the island’s history, island men began to make a large part of their living piloting boats past the dangerous reefs and towards the ports of New Bedford, Providence, and Boston. Men stood atop Lookout Hill with spyglasses in hand, scanning the horizon for incoming whaling ships headed for New Bedford. When a ship appeared, the men would scramble down to the shore to their boats in a race to be the first to offer services as a pilot. In 1903, Cuttyhunk pilots guided as many as eleven ships a day to New Bedford harbor. The reefs were indeed dangerous. In 1847 the Massachusetts Humane Society established life-saving stations throughout the Elizabeth Islands, supplied with items needed by islanders to assist boats in trouble.

The lighthouse was decommissioned and torn down in 1947, replaced by a skeleton tower. The keeper's house was also destroyed. This tower continues to exhibit a white flashing light, visible for 12 miles (19 km), from 63 feet (19 m) above sea level. The only surviving structure from the lighthouse station is a stone oil house, and its door and roof are missing.

Cuttyhunk is part of the town of Gosnold, Massachusetts and home to 52 of the town's 86 year-round residents. The single school on the island had one teacher and three students as of August 2009. The town's population swells to about 400 in the summer with vacationers and boaters. Summer residents and visitors enjoy the island’s beaches and natural beauty, but most of all its quiet and solitude. Cuttyhunk has a few trucks, but most people travel on foot or by golf cart. Cuttyhunk’s natural harbor is a popular spot for boaters to tie up for a night or even a summer.

Cuttyhunk continues to be a popular site for sportfishing, with striped bass and bluefish being the most frequent catches. Lobstering is an occupation for a few of the island’s residents, as is boat building, shellfishing, and carpentry. The island is served by a ferry named the M/V Cuttyhunk, which makes frequent trips to Cuttyhunk from New Bedford during the summer.

There are multiple bed and breakfasts and home rentals for summer tourists, but given its small size, other facilities on the island are limited, with one retail store, and one restaurant for lunch or dinner.

All content from Kiddle encyclopedia articles (including the article images and facts) can be freely used under Attribution-ShareAlike license, unless stated otherwise. Cite this article:
Cuttyhunk Island Facts for Kids. Kiddle Encyclopedia.