Lovell is a town in Oxford County, Maine, United States. The population was 1,140 at the 2010 census. Lovell is the site of Kezar Lake, a resort area. 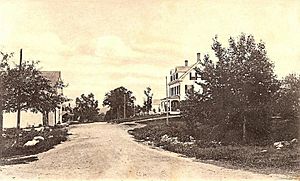 In 1774, the Massachusetts General Court granted New Suncook Plantation to the officers and soldiers (or their heirs) who fought on May 8, 1725 during Father Rale's War against the Sokokis Abenaki Indians at Pequawket (now Fryeburg). First settled in 1777, the community had 85 inhabitants by 1790. New Suncook Plantation would be incorporated as a town on November 15, 1800, renamed after Captain John Lovewell, the fallen expedition leader.

Lovell is crossed by State Route 5. It borders the towns of Stoneham to the north, Waterford to the east, Sweden to the southeast, Fryeburg to the southwest, and Stow to the west.

Kezar Lake has good habitat for smallmouth bass, white perch, chain pickerel, rainbow smelt, lake trout, and land-locked Atlantic salmon. There is a public boat launch area at the north end of the lake in North Lovell, and another at the narrows south of Center Lovell.

This climatic region is typified by large seasonal temperature differences, with warm to hot (and often humid) summers and cold (sometimes severely cold) winters. According to the Köppen Climate Classification system, Lovell has a humid continental climate, abbreviated "Dfb" on climate maps.

There were 477 households, of which 28.1% had children under the age of 18 living with them, 59.7% were married couples living together, 8.4% had a female householder with no husband present, 2.9% had a male householder with no wife present, and 28.9% were non-families. 25.4% of all households were made up of individuals, and 11.5% had someone living alone who was 65 years of age or older. The average household size was 2.39 and the average family size was 2.83.

All content from Kiddle encyclopedia articles (including the article images and facts) can be freely used under Attribution-ShareAlike license, unless stated otherwise. Cite this article:
Lovell, Maine Facts for Kids. Kiddle Encyclopedia.