The spruce grouse or Canada grouse (Falcipennis canadensis) is a medium-sized grouse closely associated with the coniferous boreal forests or taiga of North America. It is one of the most arboreal grouse, fairly well adapted to perching and moving about in trees. When approached by a predator, it relies on camouflage and immobility to an amazing degree, for example letting people come to within a few feet before finally taking flight, a behavior that has earned it the nickname "fool's hen".

Spruce grouse are 38–43 cm (15–17 in) long; males weigh 550–650 g (19–23 oz) and females 450–550 g (16–19 oz). The spruce grouse has a wingspan range of 21.5-22.6 in (54.5-57.5 cm). Races vary slightly in plumage, especially in the tail pattern and in the extent of white on the underparts, but in general adult males are mainly grey above and black below, with white spots along the side, and a red patch of bare skin over the eye called the "eyebrow comb". This red eyebrow comb, should not be confused by a similar yellow marking found on other species of grouse including, but not limited to, sharp-tailed and dusky grouse. Adult females are mottled brown (red morph) or mottled grey (grey morph) with dark and white bars on the underparts. Juveniles resemble females. Females may be confused with ruffed grouse but they have a dark tail with a pale band at the end (while the reverse is true in ruffed grouse) and they do not erect their crown feathers when alarmed the way ruffed grouse do.

In the first half of the century, spruce grouse were classified as two separate species in the genus Canachites: spruce grouse (C. canadensis) and Franklin's grouse (C. franklinii), a position reinstated by Birdlife International in 2014. Then the species were unified and moved to the genus Dendragapus, congeneric with the blue grouse with which spruce grouse often share coniferous habitats. However, spruce grouse do not have inflatable cervical sacs as in blue grouse, and the natal plumage of the two species is different. Based on its stronger resemblance to the Siberian grouse (Falcipennis falcipennis), the spruce grouse is now recognized as belonging to the genus Falcipennis. Currently five subspecies are recognized:

Franklin's grouse (F. franklinii) of British Columbia and the Rocky Mountains was recently split as a distinct species from canadensis and also consists of the subspecies isleibi in Prince of Wales Island and nearby Alexander Archipelago in southeast Alaska.

As a specialist of the taiga, the spruce grouse is found throughout Canada. In the United States, it is present in Alaska, northern New England, northern Michigan, northeastern Minnesota, northern Wisconsin and the montane coniferous forests of Montana, Idaho, Maine, Oregon, and Washington.

Spruce grouse are always associated with conifer-dominated forests, be they pine, spruce, or fir. They seem to prefer young successional stands. In summer they can be found near rich understory of blueberries and other shrub, and in winter they prefer denser stands.

The staple winter food is conifer needles, clipped directly from the tree, preferably the midcrown of pines though other conifers such as spruce are exploited as well. Spruce needles are high in calcium and their increase in use by females in Spring may be related to egg production In summer the birds can forage on the ground, eating berries, green plants such as blueberry leaves, fungi, and some insects. In winter, when only needles are consumed, the caeca (dead-end extensions of the intestines) and ventriculus (gizzard) increase in size to support digestion. The crop is also well developed: up to 45 cc of needles (about 10% of body mass) can be stored in the crop at the end of the day, to be digested over the duration of the night fast. Like other birds, spruce grouse consume clay, grit or small stones to help their gizzard break down food. Chicks under 1-week old feed on insects and other arthropods, then switch to berries and fungi until the fall, when they start feeding on needles. Birds captured while on the winter diet have been maintained several months without loss of weight, on only pine needles and grit and clay taken from where they were seen consuming it.

Males disperse and advertise a territory that is visited by females for mating. Females are solely responsible for the rest of the reproductive effort though males have been known to stay with young chicks and seem to aid in keeping the brood together. For a nest, they scratch a depression in the ground in a bush or under a low-lying coniferous branch or fallen tree, away from other females and from the males' territories. The nest is lined with grasses, leaves, and a few feathers. Nesting season is from early May to early July. Up to 10 eggs may be laid, the usual number being 4–7. Laying rate is 1 egg every 1.4 days. Eggs are about 40 mm (1.6 in) and are tawny olive or buff, marked with blotches of brown. Incubation begins with the last egg laid and lasts about 24 days. Young are about 15 g at hatching (0.5 ounces) and they are precocial; they walk out of the nest as soon as they are dry (about 8 h after hatching). They are capable of fluttering up from the ground at 1 week of age. The brood stays together and is accompanied by the hen, who broods them all night and frequently during the day until the young are 3–5 weeks old. Brooding behaviour of the female seems to be initiated by specific calls from the chicks when they are cold. At 70–100 days of age, chicks tend to leave the group and become independent. Females breed only once a year. Most females first breed at 1 year of age, but about half the males delay establishing a territory until 2 years. The species' lifespan appears to be about 5–6 years in the wild, though one study in Southwestern Alberta has found two males and one female that lived to be at least 13 years old.

Spruce grouse are among the most silent of all grouse, but they nevertheless have a number of calls used to warn of predators, to repel territorial intruders, to maintain brood cohesion, or to elicit brooding. In the subspecies franklinii, territorial males are notable for their wing-clap display. At the end of a short flight through the trees, the wings are brought together over the back so as to produce two sharp claps, about 0.5 s apart, loud enough to be heard by the human ear 150 m away. These territorial displays can sometimes be elicited by similar hand clapping, and can be used to detect male territories and estimate their density. Other non-vocal sounds include soft drumming by territorial males (a sound produced by the beating wings) and a tail-swish and a whoosh produced by the tail feathers in flight. 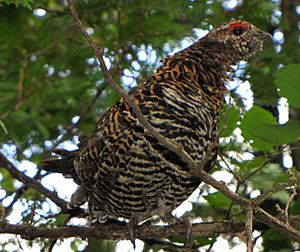 This species prefers to walk on the ground or along tree limbs rather than fly. Like other grouse, in the fall they grow "snow shoes" (short lateral extensions, or pectinations) on their toes. This increases the surface area of the toes and helps support the bird on snow and probably to grip branches as well. The pectinations are shed in the spring. Flights are usually over short distances, most commonly from the ground to a tree nearby, or vice versa. Flight can be rapid but no actual measures of velocity have been made.

The spruce grouse is essentially a permanent resident. However, in Southwestern Alberta up to 35% of females and 7% of males move several kilometers (up to 11) between summer breeding sites and wintering sites. Similar movements have also been documented in Alaska and New Brunswick (Canada).

This species is commonly hunted. Annual bag figures in the late 1970s were about 188,000 birds in the US and about 360,000 in Canada. Even though it has been deemed of Least Concern by IUCN, in the United States this bird is a protected species according to many northern states' hunting rules.

All content from Kiddle encyclopedia articles (including the article images and facts) can be freely used under Attribution-ShareAlike license, unless stated otherwise. Cite this article:
Spruce grouse Facts for Kids. Kiddle Encyclopedia.