The hermit thrush (Catharus guttatus) is a medium-sized North American thrush. It is not very closely related to the other North American migrant species of Catharus, but rather to the Mexican russet nightingale-thrush.

The specific name guttatus is Latin for "spotted". 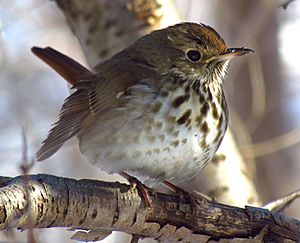 Taken in southern Ontario during winter

Hermit thrushes breed in coniferous or mixed woods across Canada, southern Alaska, and the northeastern and western United States. They make a cup nest on the ground or relatively low in a tree.

While most hermit thrushes migrate to wintering grounds in the southern United States and south to Central America, some remain in northern coastal US states and southern Ontario. They usually breed in forests, but will sometimes winter in parks and wooded suburban neighbourhoods.

They are very rare vagrants to western Europe and northeast Asia.

They forage on the forest floor, also in trees or shrubs, mainly eating insects and berries.

The hermit thrush's song has been described as "the finest sound in nature" and is ethereal and flute-like, consisting of a beginning note, then several descending musical phrases in a minor key, repeated at different pitches. It often sings from a high open location. Analysis of the notes of its song indicates that they are related by harmonic simple integer pitch ratios, like many kinds of human music and unlike the songs of other birds that have been similarly examined. 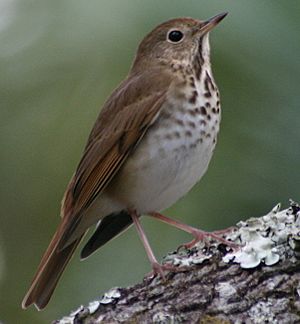 The hermit thrush is the state bird of Vermont.

Walt Whitman construes the hermit thrush as a symbol of the American voice, poetic and otherwise, in his elegy for Abraham Lincoln, "When Lilacs Last in the Dooryard Bloom'd," one of the fundamental texts in the American literary canon. "A Hermit Thrush" is the name of a poem by the American poet Amy Clampitt. A hermit thrush appears in the fifth section ("What the Thunder Said") of the T. S. Eliot poem The Waste Land.

Former Canadian indie-rock band Thrush Hermit took their name from a reversal of the bird's name. It is also shared by the American bands Hermit Thrushes and Hermit Thrush.

All content from Kiddle encyclopedia articles (including the article images and facts) can be freely used under Attribution-ShareAlike license, unless stated otherwise. Cite this article:
Hermit thrush Facts for Kids. Kiddle Encyclopedia.