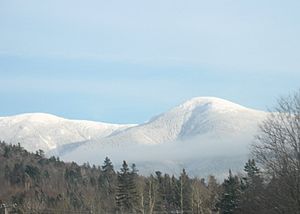 Mount Eisenhower, seen from US Hwy 302, near Bretton Woods. Mount Franklin is visible at the left.

Mount Eisenhower, formerly Mount Pleasant, is a mountain in the Presidential Range in the White Mountains of New Hampshire approximately 4,760 ft (1,450 m) high. Named after President Dwight D. Eisenhower, its summit offers a 360° view. It is inaccessible by road.

The mountain was known as Mount Pleasant until the New Hampshire Legislature voted in 1969 to name it after President Eisenhower, and the U.S. Board on Geographic Names agreed in 1970.

The shortest trail route to the summit of Eisenhower is from a parking lot on Mount Clinton Road, to its west-northwest, via primarily the Edmands Path. Several routes are available from points more or less southwest of it on Route 302; the most used of these (probably roughly equal in popularity to the Edmands route) is via the Crawford Path, starting from a parking lot on Mount Clinton Road, very near 302 and just north of the Highland Center in the Crawford Notch area. Mount Monroe lies on the ridge northeast of Mt. Eisenhower, and Mount Pierce to the southwest. All three of these peaks are included on the peak-bagging list of four-thousand footers in New Hampshire. Mount Franklin, an "unofficial" peak (not prominent enough to be included in the list), lies between Mount Eisenhower and Mount Monroe.

All content from Kiddle encyclopedia articles (including the article images and facts) can be freely used under Attribution-ShareAlike license, unless stated otherwise. Cite this article:
Mount Eisenhower Facts for Kids. Kiddle Encyclopedia.