Castle in the Clouds facts for kids

Kids Encyclopedia Facts
This page is about the mansion and mountaintop estate in New Hampshire, USA. For other uses, see Castle in the sky.

Castle in the Clouds (or Lucknow) is a 16-room mansion and 5,294-acre (2,142 ha) mountaintop estate in Moultonborough, New Hampshire, opened seasonally to the public by the Castle Preservation Society. It overlooks Lake Winnipesaukee and the Ossipee Mountains from a rocky outcropping of Lee Mountain formerly known as "The Crow's Nest".

The home was built in 1913–1914 in the Craftsman style by millionaire shoe manufacturer Thomas Gustave Plant (1859–1941) for his second wife, Olive Cornelia Dewey. He named the estate Lucknow, perhaps after the city of Lucknow in India. The property was assembled from the private Ossipee Mountain Park, an observation area called the Crow's Nest, and a variety of other lodges and buildings. He razed the structures and built the mansion, a stable/garage, gatehouses, a greenhouse, farm buildings, and a golf course. The property eventually extended to 6,300 acres (25 km2). 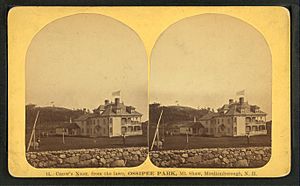 Designed by prominent Boston architect J. Williams Beal (assisted by his sons John W. Beal and Horatio Beal), the house included many innovations which were rare at the time, including a circular shower, interlocking kitchen tiles, and a central vacuum system. The interiors were designed by Irving & Casson-A.H. Davenport. Bronze and tile work were by William Jackson & Company; electric fixtures by Edward F. Caldwell & Co.; and glass by Tiffany.

After Plant lost his money in a series of bad investments in the 1930s, the house was foreclosed upon, but his creditors allowed him to stay in the mansion until his death, and the furnishings remained with the house. Plant died in 1941, and the property was purchased by Fred C. Tobey to log its hardwoods and serve as a family summer home. The estate was sold to Richard and Donald Robie in 1956, who opened it as a tourist attraction.

Castle in the Clouds is today owned and operated by the Castle Preservation Society, a private 501(c)(3) non-profit corporation. The Castle, Carriage House, gift shop, art gallery and Cafe and Patio are open to the public from late May to early October. The property was listed on the National Register of Historic Places in 2018.

All content from Kiddle encyclopedia articles (including the article images and facts) can be freely used under Attribution-ShareAlike license, unless stated otherwise. Cite this article:
Castle in the Clouds Facts for Kids. Kiddle Encyclopedia.