Freedom is a town located in Carroll County, New Hampshire, United States. The population was 1,689 at the 2020 census, up from 1,489 at the 2010 census. The town's eastern boundary runs along the Maine state border. Ossipee Lake, with a resort and camps, is in the southwest of the town. 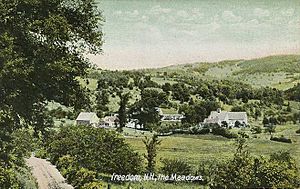 The town was once a part of Effingham called "North Effingham". Following an influx of new settlers from Maine, there was a conflict of culture and religion between them and people from the New Hampshire seacoast area who already populated Effingham. As a result, North Effingham separated into a town of its own. The community, incorporated in 1831, was appropriately named "Freedom".

The town was the setting for the children's fantasy book The Enormous Egg by Oliver Butterworth, first published in 1956 but reissued years later, and a 2001 broadcast of This American Life, "House on Loon Lake". The episode depicted an abandoned house explored by young boys in town for summer camp at Loon Lake. 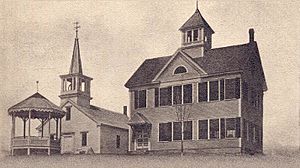 Freedom is situated between the Lakes Region and the White Mountains. According to the United States Census Bureau, the town has a total area of 38.1 square miles (99 km2), of which 35.0 square miles (91 km2) is land and 3.1 square miles (8.0 km2) is water, comprising 8.23% of the town. The highest point in the town is the summit of Cragged Mountain, at 1,806 feet (550 m) above sea level. Freedom is drained by the Ossipee River and lies fully within the Saco River watershed.

Freedom is one of several sites for Nature's Classroom. It is also home to one of the permanent campsites of the Luethi-Peterson Camps and to Cragged Mountain Farm, a co-ed summer camp on Cragged Mountain started by Dr. Henry Utter in 1927, and still owned by the Utter family. 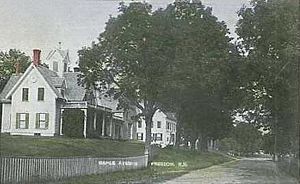 There were 699 households, out of which 19.0% had children under the age of 18 living with them, 56.9% were headed by married couples living together, 5.7% had a female householder with no husband present, and 34.6% were non-families. 28.9% of all households were made up of individuals, and 14.5% were someone living alone who was 65 years of age or older. The average household size was 2.12, and the average family size was 2.57. 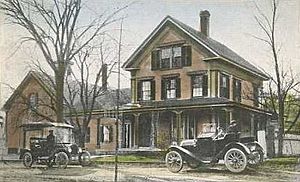 The largest ancestry groups in Freedom as of 2007-11 were:

All content from Kiddle encyclopedia articles (including the article images and facts) can be freely used under Attribution-ShareAlike license, unless stated otherwise. Cite this article:
Freedom, New Hampshire Facts for Kids. Kiddle Encyclopedia.