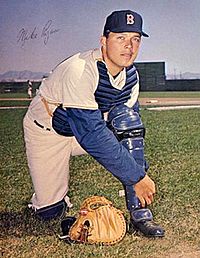 Michael James Ryan (November 25, 1941 – July 10, 2020) was an American baseball player and coach. He was born in Haverhill, Massachusetts. He played for Major League Baseball between 1964 to 1974. He played for the Boston Red Sox, Philadelphia Phillies and the Pittsburgh Pirates. He coached the Phillies between 1980 to 1995.

All content from Kiddle encyclopedia articles (including the article images and facts) can be freely used under Attribution-ShareAlike license, unless stated otherwise. Cite this article:
Mike Ryan (catcher) Facts for Kids. Kiddle Encyclopedia.