The High Museum of Art (colloquially the High) is an art museum in Atlanta, Georgia in the Southeastern United States. Located on Peachtree Street in Midtown, the city's arts district, the High is a division of the Woodruff Arts Center. 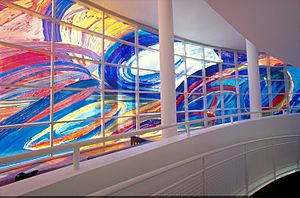 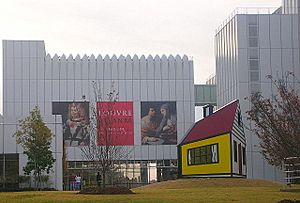 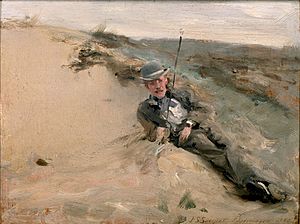 John Singer Sargent, Ralph Curtis on the Beach in Scheveningen, 1880 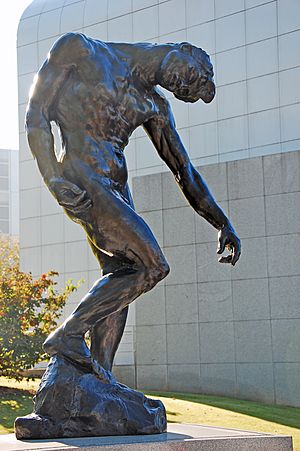 An Auguste Rodin sculpture The Shade, 1880-81, donated to the High by the French government in memory of victims of a plane crash during a museum-sponsored trip in Paris, France

The museum was founded in 1905 as the Atlanta Art Association. In 1926, the High family, for whom the museum is named, donated their family home on Peachtree Street to house the collection following a series of exhibitions involving the Grand Central Art Galleries organized by Atlanta collector J. J. Haverty. Many pieces from the Haverty collection are now on permanent display in the High. A separate building for the museum was built adjacent to the family home in 1955.

On June 3, 1962, 106 Atlanta arts patrons died in an airplane crash at Orly Airport in Paris, France, while on a museum-sponsored trip. Including crew and other passengers, 130 people were killed in what was, at the time, the worst single plane aviation disaster in history. Members of Atlanta's prominent families were lost including members of the Berry family who founded Berry College. During their visit to Paris, the Atlanta arts patrons had seen Whistler's Mother at the Louvre. In the fall of 1962, the Louvre, as a gesture of good will to the people of Atlanta, sent Whistler's Mother to Atlanta to be exhibited at the Atlanta Art Association museum on Peachtree Street.

To honor those killed in the 1962 crash, the Atlanta Memorial Arts Center was built for the High. The French government donated a Rodin sculpture The Shade to the High in memory of the victims of the crash.

In 1983, a 135,000-square-foot (12,500 m2) building designed by Richard Meier opened to house the High Museum of Art. Meier won the 1984 Pritzker Prize after completing the building. The Meier building was funded by a $7.9 million challenge grant from former Coca-Cola president Robert W. Woodruff matched by $20 million raised by the museum. Meier's highly sculptural building has been criticized as having more beauty than brains. For example, constructed with white concrete, the lobby, a giant atrium in the middle of the building's cutaway cube, has almost no exhibition space, and columns throughout the interior restrict the way curators can display large works of modern art. Also with the atrium being just one of four quadrants, it's viewed as a luxuriously structured, but vacant pathway leading to the other exhibits, which is quite a shame when considering how radiant and light-filled the room is. At 135,000 square feet (12,500 m2), the Meier building has room to display only about three percent of the museum's permanent collection. Although the building officially contains 135,000 square feet, only about 52,000 square feet (4,800 m2) is gallery space.

The Meier building, now the Stent Family Wing, was termed Director Gudmund Vigtel's "crowning achievement" by his successor Michael Shapiro. During Vigtel's tenure 1963-1991, the size of the museum's permanent collection tripled, endowment and trust funds of more than $15 million were established, the operating budget increased from $60,000 to $9 million and the staff expanded from four to 150.

In 2005, Renzo Piano designed three new buildings which more than doubled the museum's size to 312,000 square feet (29,000 m2), at a cost of $124 million. The Piano buildings were designed as part of an overall upgrade of the entire Woodruff Arts Center complex. All three new buildings erected as part of the expansion of the High are clad in panels of aluminum to align with Meier's original choice of a white enamel façade. Piano's design of the new Wieland Pavilion and Anne Cox Chambers Wing features a special roof system of 1,000 light scoops that capture northern light and filter it into the skyway galleries. 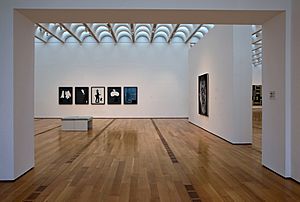 The interior of the High

To reflect the continent’s deep, rich history while foregrounding recent innovations, the High’s African art collection includes a diversity of art forms from ancient through contemporary times. To represent the depth and breadth of the African diaspora, the High continues to strengthen its holdings of works by artists of African ancestry, including African American artists, to highlight cultural bonds throughout the Black Atlantic world and beyond.

The heart and soul of the African art collection consists of extraordinary examples of masks and figurative sculptures, enriched by exceptionally fine textiles, beadwork, metalwork, and ceramics. Antiquities include an animated terracotta sculpture of a female torso wrapped in snakes (ca. 1200–1500). From the region of ancient Djenne, one of Africa’s oldest cities, this work represents Sogolon, mother of Sundiata, founder of the Mali Empire. Along with this work, a Qu’ran (ca. 1600) from Timbuktu, Djenne’s sister city, highlights art of the Mali Empire, one of the largest and most important kingdoms the world has ever known.

The Museum’s American art collection includes more than 1,200 paintings, sculptures, drawings, and prints made by American artists between 1780 and 1980. With particular strengths in historic American sculpture and painting, the collection demonstrates the evolution of a distinctly American point of view in artistic representation.

The decorative arts and design collection explores the merging of function and aesthetics through form, material, process, place, and intent. It features the renowned Virginia Carroll Crawford Collection—the most comprehensive survey of nineteenth- and early twentieth-century American decorative arts in the southeastern United States—with important works by Alexander Roux, Herter Brothers, Tiffany & Co., and Frank Lloyd Wright. Other notable gifts include the Frances and Emory Cocke Collection of English Ceramics from 1640 to 1840.

The collection’s international contemporary design holdings recently have expanded with the addition of significant works by Joris Laarman Lab, Jaime Hayon, Ron Arad, and nendo. With more than 2,300 objects dating from 1640 to the present, the collection explores the intersections between art, craft, and design; handcraft and technology; and innovation and making. 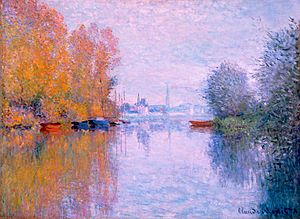 Autumn on the Seine, Argenteuil by Claude Monet, 1873

This collection represents seven centuries of artistic achievement throughout Europe. The High’s holdings of more than 1,000 paintings, sculptures, and works on paper span the 1300s through the 1900s and trace the development of religion, scientific discovery, and social change through the lens of the continent’s visual culture.

In 1958, the Samuel H. Kress Foundation donated what became the core of the High’s European art collection. The Kress Collection includes Giovanni Bellini’s Madonna and Child, Vittore Carpaccio’s Prudence and Temperance, and other artworks from Renaissance and Baroque Europe. Since then, the High’s European collection has grown to represent most major art movements and styles, exemplified by paintings and sculptures of such masters as Nicolas Tournier, Guercino (Jesus and the Samaritan Woman at the Well), Jan Breughel the Elder, Giovanni Battista Tiepolo, Charles-Joseph Natoire, Anne-Louis Girodet-Trioson (The Burial of Atala), Camille Corot, Jean-Joseph Carriès (Sleeping Faun), and Auguste Rodin (Eternal Spring).

Today, the European collection is especially rich in French Impressionist and Post-Impressionist paintings, many of which came as a gift in 2019 from Atlanta collectors Doris and Shouky Shaheen. The holdings include Claude Monet’s 1873 Autumn of the Seine; Argenteuil, a rare seascape by Frédéric Bazille, and Henri Matisse’s Woman Seated at the Piano, as well as paintings by Eugène Boudin, Camille Pissarro, Alfred Sisley, Pierre-Auguste Renoir, Henri Fantin-Latour, Émile Bernard, Édouard Vuillard, and others.

The High Museum began collecting the work of living self-taught artists in 1975 and was the first general interest museum to establish a dedicated department for folk and self-taught art in 1994. This collection is especially rich in artworks by Southern and African American artists and features the largest groups of work by Bill Traylor, Howard Finster, Nellie Mae Rowe, and Thornton Dial held by any museum.

Although the majority of these artists could be identified as American or contemporary, the High refers to them as “folk,” which underscores their status as artists of the people, or “self-taught,” to emphasize that they were not formally trained.

Modern and contemporary art at the High traces the development of innovative visual languages since 1945 that have influenced how people perceive, understand, and interpret the world, its histories, and human experience.

Modern and contemporary art at the High Museum includes outstanding examples of work by seminal artists, those just entering the canon, and emerging artists. The collection prominently features multiple works by artists such as Radcliffe Bailey, Alex Katz, and Ellsworth Kelly as well as a growing collection of significant individual works by artists including Michaël Borremans, Alfredo Jaar, Anish Kapoor, KAWS, Julie Mehretu, Judy Pfaff, Sarah Sze, and Kara Walker, with a special focus on work by African American artists.

The High began collecting photographs in the early 1970s, making it among the earliest museums to commit to the medium. Today, the photography department is one of the nation’s leading programs and, with some 7,500 prints, comprises the Museum’s largest collection.

These holdings encompass work from around the world made by diverse practitioners, from artists, to entrepreneurs, to journalists, to scientists. Spanning the very beginnings of the medium in the 1840s to the present, the High’s collection has particular strengths in American modernist and documentary traditions from the mid-twentieth century as well as current contemporary trends.

The photography collection maintains a strong base of pictures related to the American South and situates this work within a global context that is both regionally relevant and internationally significant. The High owns one of the largest collections of photographs of the civil rights movement and some of the country’s strongest monographic collections of photographs by Eugene Atget, Dawoud Bey, Isla Bing, Wynn Bullock, Lucinda Bunnen, Harry Callahan, William Christenberry, Walker Evans, Leonard Freed, Evelyn Hofer, Clarence John Laughlin, Abelardo Morell, and Peter Sekaer.

The collection also gives special attention to pictures made in and of the South, serving as the largest and most significant repository representing the region's important contributions to the history of photography. Since 1996, the High's distinctive "Picturing the South" initiative has commissioned established and emerging photographers to produce work inspired by the area's geographical and cultural landscape. Past participants include Sally Mann, Dawoud Bey, Emmet Gowin, Alex Webb, Alec Soth, Richard Misrach, Kael Alford and Debbie Fleming Caffery, whose commissions have all been added to the High's permanent collection.

Special exhibitions at the High feature strong global partnerships with other museums such as the Louvre and with the Opera di Santa Maria del Fiore and the Opificio delle pietre dure in Florence. In 2008, the museum inked a US$18 million deal for Louvre Atlanta, a three-year revolving loan of art from the Musée du Louvre in Paris, resulting in the museum's highest attendance ever. Its most popular individual show was 2009's Louvre Atlanta: the Louvre and the Masterpiece.

The museum is also a Smithsonian Institution Affiliate. 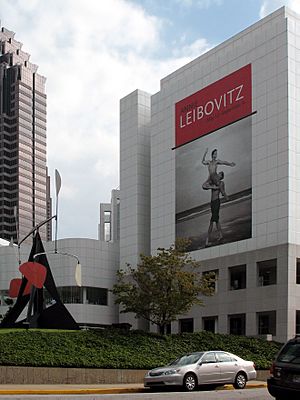 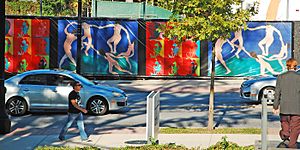 Across from the High during the "Picasso to Warhol" exhibit

From 1963, Gudmund Vigtel led the High as director for 28 years, overseeing its transformation from a regional institution housed in a simple brick building into one of the nation's most successful art museums, and shepherding its move to its building designed by Richard Meier. Ned Rifkin served as the museum's director between 1991 and 2000. During the tenure of director Michael E. Shapiro between 2000 and 2014, the museum nearly doubled the number of works in its permanent collection, acquiring important paintings by 19th and 20th century and contemporary artists. The High raised nearly $230 million during that time, increasing its endowment by nearly 30 percent and building an acquisition fund of nearly $20 million. In July 2015, the High Museum of Art announced that it had selected Randall Suffolk to be its new director. Suffolk began his tenure in November 2015.

All content from Kiddle encyclopedia articles (including the article images and facts) can be freely used under Attribution-ShareAlike license, unless stated otherwise. Cite this article:
High Museum of Art Facts for Kids. Kiddle Encyclopedia.