Eric Carle (June 25, 1929 – May 23, 2021) was a German-American designer, illustrator, and writer of children's books. His picture book The Very Hungry Caterpillar, first published in 1969, has been translated into more than 66 languages and sold more than 50 million copies. His career as an illustrator and children's book author took off after he collaborated on Brown Bear, Brown Bear, What Do You See?. He illustrated more than 70 books, most of which he also wrote, and more than 145 million copies of his books have been sold around the world.

In 2003, the American Library Association awarded Carle the biennial Laura Ingalls Wilder Medal (now called the Children's Literature Legacy Award), a prize for writers or illustrators of children's books published in the U.S. who have made lasting contributions to the field. Carle was also a U.S. nominee for the biennial, international Hans Christian Andersen Award in 2010.

Carle was born on June 25, 1929, in Syracuse, New York, the son of Johanna (née Oelschlaeger) and Erich W. Carle, a civil servant. When he was six years old, his mother, homesick for Germany, led the family back to Stuttgart. He was educated there and graduated from the local art school, the State Academy of Fine Arts Stuttgart. His father was drafted into the German army at the beginning of World War II (1939) and taken prisoner by the Soviet forces when Germany capitulated in May 1945. He returned home late in 1947 weighing 85 pounds (39 kg). Carle told The Guardian years later that he was a broken man when he came back. He was a "sick man. Psychologically, physically devastated."

Carle was sent to the small town of Schwenningen to escape the bombings of Stuttgart. When he was 15, the German government conscripted boys of that age to dig trenches on the Siegfried line. He did not care to think about it deeply and said his wife thought he suffered from post-traumatic stress.

You know about the Siegfried line? To dig trenches. And the first day three people were killed a few feet away. None of us children -- Russian prisoners and other conscripted workers. The nurses came and started crying. And in Stuttgart, our home town, our house was the only one standing. When I say standing, I mean the roof and windows are gone, and the doors. And, well, there you are.

Always homesick for the United States, he dreamed of returning home one day. He eventually made it to New York City in 1952 with only $40 in savings and landed a job as graphic designer in the promotion department of The New York Times. He was drafted into the U.S. Army during the Korean War and stationed in Germany with the 2nd Armoured Division as a mail clerk. After discharge he returned to his old job with The New York Times. Later he became the art director of an advertising agency.

Educator and author Bill Martin Jr. noticed the illustration of a red lobster Carle had created for an advertisement and asked him to collaborate on a picture book.

Brown Bear, Brown Bear, What Do You See? was published by Henry Holt & Co. in 1967 and became a best-seller. Thus began Carle's career as an illustrator, and soon he was writing and illustrating his own stories. His first books as both author and illustrator were 1, 2, 3 to the Zoo and The Very Hungry Caterpillar in 1969.

His artwork was created as collage, using hand-painted papers, which he cut and layered to form bright and colourful images. Many of his books have an added dimension—die-cut pages, twinkling lights as in The Very Lonely Firefly, even the lifelike sound of a cricket's song as in The Very Quiet Cricket. The themes of his stories are usually drawn from nature and the walks his father would take him on across meadows and through woods.

In his own words:

With many of my books I attempt to bridge the gap between the home and school. To me home represents, or should represent; warmth, security, toys, holding hands, being held. School is a strange and new place for a child. Will it be a happy place? There are new people, a teacher, classmates—will they be friendly?

I believe the passage from home to school is the second biggest trauma of childhood; the first is, of course, being born. Indeed, in both cases, we leave a place of warmth and protection for one that is unknown. The unknown often brings fear with it. In my books, I try to counteract this fear, to replace it with a positive message. I believe that children are naturally creative and eager to learn. I want to show them that learning is really both fascinating and fun.

For over 30 years, Carle and his second wife, Barbara Morrison, lived in Northampton, Massachusetts. He also owned a home in Key West, Florida. Carle had a son and a daughter.

With his second wife, he founded The Eric Carle Museum of Picture Book Art: 44,000 sq ft (4,100 m2) devoted to the art of children's books in Amherst, adjacent to Hampshire College. According to the museum, it has had over 500,000 visitors, including more than 30,000 school children, since it opened its doors in 2002.

Carle received numerous honorary degrees from colleges and universities including Williams College in 2016, Smith College in 2014, Appalachian State University in 2013 and from Bates College in 2007.

Google paid tribute to Carle and his book The Very Hungry Caterpillar by asking him to design the logo "Google doodle", introduced on its home page on March 20, 2009, celebrating the first day of spring.

Carle won numerous awards for his work in children's literature, including the Japan Picture Book Award, the Regina Medal and the Lifetime Achievement Award from the Society of Illustrators In 2003, he received the Laura Ingalls Wilder Award (now called the Children's Literature Legacy Award),from the professional children's librarians, which recognizes an author or illustrator whose books, published in the United States, have made "a substantial and lasting contribution to literature for children". The committee cited his "visual observations of the natural world" and his innovative designs: "Taking the medium of collage to a new level, Carle creates books using luminous colors and playful designs often incorporating an interactive dimension, tactile or auditory discoveries, die-cut pages, foldouts, and other innovative uses of page space."

In a 2012 survey of School Library Journal readers, The Very Hungry Caterpillar was voted the number two children's picture book behind Where the Wild Things Are.

In 2019, a jumping spider mimicking a caterpillar was named in Carle's honor, to commemorate the 50th anniversary of the publication of The Very Hungry Caterpillar, and to celebrate his 90th birthday.

Carle died on May 23, 2021, at his studio home in Northampton, Massachusetts, from kidney failure, just over a month before his 92nd birthday. 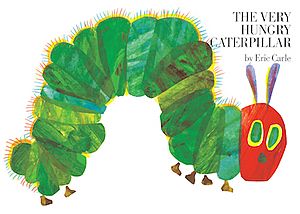 Eric Carle wrote over 70 books that sold over 170 million copies.

All content from Kiddle encyclopedia articles (including the article images and facts) can be freely used under Attribution-ShareAlike license, unless stated otherwise. Cite this article:
Eric Carle Facts for Kids. Kiddle Encyclopedia.