Brown Bear, Brown Bear, What Do You See? is a children's picture book published in 1967. Written and illustrated by Bill Martin, Jr. and Eric Carle, the book is designed to help toddlers associate colors and meanings to objects.

The book itself has little to no plot. Instead, the narrator asks various animals what they see with the response usually being another animal, the respondent is then asked what they themselves see, and the process is repeated. It features a Brown Bear, a Red Bird, a Yellow Duck, a Blue Horse, a Green Frog, a Purple Cat, a White Dog, a Black Sheep, a Goldfish (Orange Fish), a school teacher, and children. The 1967 first edition of the book subs a monkey for the teacher. Carle explained that variations in text between editions (mostly on the last page) were due to Martin, and that he made new illustrations to go with the changes. The 1970 edition includes a Grey Mouse in-between the Blue Horse and the Green Frog, and a Pink Elephant in-between the Purple Cat and the White Dog. 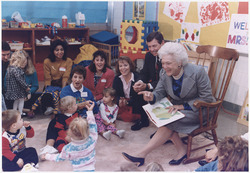 Missouri Governor John Ashcroft and First Lady Barbara Bush with a "Parents as Teachers" group at the Greater St. Louis Ferguson-Florissant School District in October 1991. Mrs. Bush (in a rocking chair) is reading Brown Bear, Brown Bear to the children.

All content from Kiddle encyclopedia articles (including the article images and facts) can be freely used under Attribution-ShareAlike license, unless stated otherwise. Cite this article:
Brown Bear, Brown Bear, What Do You See? Facts for Kids. Kiddle Encyclopedia.