Woodbury County is a county located in the U.S. state of Iowa. As of the 2020 census, the population was 105,941, making it the sixth-most populous county in Iowa. The county seat is Sioux City.

Originally established in 1851 as Wahkaw County, the Iowa Legislature in 1853 changed the name to Woodbury County in honor of Levi Woodbury (1789–1851), a senator and Governor of New Hampshire who served as a Supreme Court justice from 1844 until his death.

The first county seat of Wahkaw County was the now-extinct village of Thompsonville; when the Legislature changed the county name to Woodbury, the new county seat became Sergeant's Bluff (now Sergeant Bluff). The county seat was moved to Sioux City in 1856. 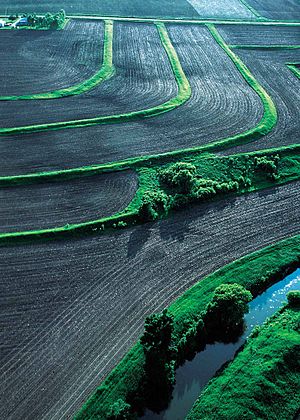 Terraces, conservation tillage and buffers save soil and improve water quality on this Woodbury County farm in 1999. 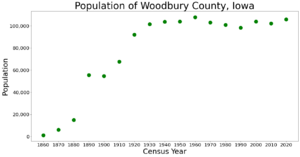 Population of Woodbury County from US census data

The population ranking of the following table is based on the 2010 census of Woodbury County.

All content from Kiddle encyclopedia articles (including the article images and facts) can be freely used under Attribution-ShareAlike license, unless stated otherwise. Cite this article:
Woodbury County, Iowa Facts for Kids. Kiddle Encyclopedia.