Dakota County is a county in the U.S. state of Nebraska. As of the 2010 United States Census, the population was 21,006. Its county seat is Dakota City.

In the Nebraska license plate system, Dakota County is represented by the prefix 70 (it had the 70th-largest number of vehicles registered in the county when the license plate system was established in 1922). In August 2009, the Dakota County Board of Commissioners reversed a decision to abandon this system for alphanumeric plates upon introduction of new license plates in 2011. Douglas, Lancaster, and Sarpy Counties remain the only counties with alphanumeric plates in the state.

Succeeding cultures of indigenous peoples lived along the Missouri River for thousands of years. By 1775, the Omaha people had migrated west of the Missouri, where they established a major settlement, which they called Ton-wa-tonga, meaning the Big Village. It had about 1100 residents. From here, the Omaha controlled fur trading on the upper Missouri River with other tribes and with French-Canadian traders, often called voyageurs. The Omaha were the first of the Northern Plains tribes to have adopted an equestrian culture.

Dakota County was formed by European-American settlers in 1855. They named it after the historic Dakota Sioux tribe, who were powerful in the area of Nebraska and South Dakota. By this time, the Omaha were concentrated further south in what became the state of Nebraska.

In 1885, the county went to the United States Supreme Court in Dakota County v. Glidden over a dispute with issuing bonds.

The county is separated from South Dakota on the northeast and Iowa on the east by the Missouri River. The surface consists of rolling prairies and bottom lands. 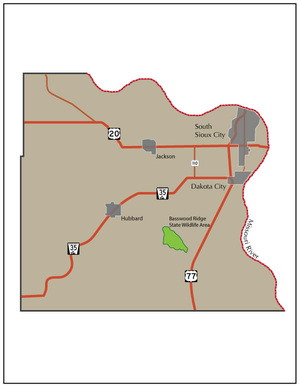 All content from Kiddle encyclopedia articles (including the article images and facts) can be freely used under Attribution-ShareAlike license, unless stated otherwise. Cite this article:
Dakota County, Nebraska Facts for Kids. Kiddle Encyclopedia.