Moville is a city in Woodbury County, Iowa, United States. It is part of the Sioux City, IA–NE–SD Metropolitan Statistical Area. The population was 1,687 in the 2020 census, an increase from 1,583 in 2000.

John B McDermott is credited with naming the town of Moville after his birthplace in Moville, Ireland (County Donegal). In 1868, he and other men from the area established a post office at the McDermott home. Because McDermott and his wife Martha housed the post office, they chose to name their new town "Moville." Only two Movilles exist in the world. In Iowa, it is pronounced "MOH ville" while in Ireland it is pronounced "Moe-Ville."

On April 23, 1887, the West Town Lot Company filed at the Woodbury County Courthouse a platted map to be known as the town of Moville, Iowa. Moville citizens approved incorporation of the town in a special election held Aug. 10, 1889. The Articles of Incorporation were filed and approved on Aug. 13, 1889 by the clerk of district court, Woodbury County. Townspeople celebrated its centennial June 19–21, 1987 and celebrated its quasquicentennial (125 years) in 2012.

According to the United States Census Bureau, the city has a total area of 0.89 square miles (2.31 km2), all of it land.

There were 643 households, of which 35.8% had children under the age of 18 living with them, 58.8% were married couples living together, 8.7% had a female householder with no husband present, 4.0% had a male householder with no wife present, and 28.5% were non-families. 24.7% of all households were made up of individuals, and 13% had someone living alone who was 65 years of age or older. The average household size was 2.52 and the average family size was 3.00.

Moville is home to three parks within city limits and one just north of town.

Moville is home to the annual Woodbury County Fair, which attracts visitors and exhibits from all around Siouxland. Grandstand events attract the largest crowds, and include a tractor pull, musical performances, and demolition derby.

The town also hosts an annual Moville Days celebration, usually around the beginning of June. 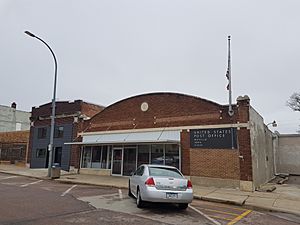 All content from Kiddle encyclopedia articles (including the article images and facts) can be freely used under Attribution-ShareAlike license, unless stated otherwise. Cite this article:
Moville, Iowa Facts for Kids. Kiddle Encyclopedia.