Plymouth County is a county located in the U.S. state of Iowa. As of the 2020 census, the population was 25,698. The county seat is Le Mars. Plymouth County was named after Plymouth, Massachusetts.

Plymouth County was formed on January 15, 1851. Settlement began in the county in 1856. In October, 1859, the first courthouse was built in Melbourne, formerly located in the southeast quarter of section 34, Plymouth Township, about five to six miles due south of Merrill. The first public school opened its doors there with 32 pupils. In 1872, the county seat was moved to Le Mars and a new courthouse and a jail were built there in 1873. The courthouse in present use was built in 1900 of red sandstone.

During the Great Depression, the farmers organized a group, which they named the Farmers Holiday Group. The goal was to keep farm products off the market until the desired price was met. A radical group among them abducted Judge Bradley from his court chamber and threatened to hang him in the front of the courthouse. Bradley was freed, but the governor ordered the national guard to Plymouth County and declared state of emergency, which meant the end of the Farmers Holiday Group. 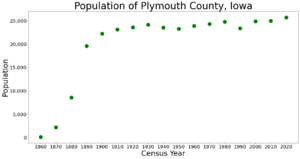 Population of Plymouth County from US census data

The population ranking of the following table is based on the 2010 census of Plymouth County.

All content from Kiddle encyclopedia articles (including the article images and facts) can be freely used under Attribution-ShareAlike license, unless stated otherwise. Cite this article:
Plymouth County, Iowa Facts for Kids. Kiddle Encyclopedia.