Le Mars is a city in and the county seat of Plymouth County, Iowa, United States. It is located on the Floyd River and northeast of Sioux City. The population was 9,826 at the 2010 census.

Le Mars is the home of Wells Enterprises, Inc., perhaps the world's largest producer of ice cream novelties in one location and is the self-proclaimed "Ice Cream Capital of the World". Wells is best known for its Blue Bunny products.

Le Mars was platted in 1869, but no lots were sold until the Chicago and North Western Transportation Company arrived in 1879. According to town legend, CNW investor John I. Blair and a group of women arrived at the town, which was then called St. Paul Junction. Blair asked the women to name the town, and they submitted an acronym based upon their first names' initials: Lucy Underhill, Elizabeth Parson, Mary Weare, Anna Blair, Rebecca Smith and Sarah Reynolds.

In 1885, Frederick Brooke Close, a young Englishman who had passed up attending Cambridge University to live in Iowa, founded the Northwestern Polo League in Le Mars.

During the Great Depression in 1933, at a time when banks were foreclosing on many farmers, Le Mars caught the attention of the nation when "over five hundred farmers crowded the court room in Le Mars", according to an account by historian Arthur Schlesinger, Jr.. The farmers were there to demand that Judge Charles C. Bradley suspend foreclosure proceedings until recently passed laws could be considered. Judge Bradley refused. One farmer remarked that the court room wasn't his alone, that farmers had paid for it with their taxes. The crowd rushed the judge, slapped him, and placed a rope around his neck and a hub cap on his head. They did not, however lynch him.

Fred H. Wells opened a milk route in Le Mars in 1913. By 1925, Wells and his sons had opened an ice cream manufacturing plant there. However, the plant (and the Wells name) was purchased by Fairmount Ice Cream in 1928. In 1935, Fred and his sons sought to begin selling ice cream again, but could no longer use their name. They therefore sponsored a “Name That Ice Cream” contest in the Sioux City Journal. The winner of the $25 prize suggested "Blue Bunny" because his son had enjoyed seeing blue bunnies in department store windows at Easter. 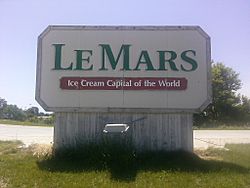 Dominating the skyline of present-day Le Mars is Wells' Blue Bunny Dairy's 900,000-square-foot (84,000 m2) plant with a 12-story tall refrigeration tower called the "South Ice Cream Plant" - so-named because it is on the south side of town. As of 2005, the plant employed 1,000 and produces 75 million gallons of frozen treats, the milk coming mainly coming from three large Iowa dairy farms. The size of this plant has led to speculation that the company is the world's largest family-owned and managed dairy processor and the world's largest manufacturer of ice cream in one location, with Le Mars claiming to be the "Ice Cream Capital of the World".

President George W. Bush came to Le Mars on November 3, 2006, to campaign for Jim Nussle, then candidate for Iowa governor. He spoke at Le Mars Community High School to a crowd of a couple thousand.

Le Mars is a part of the Sioux City metropolitan area.

There were 4,013 households of which 31.8% had children under the age of 18 living with them, 52.3% were married couples living together, 8.5% had a female householder with no husband present, 3.9% had a male householder with no wife present, and 35.4% were non-families. 30.6% of all households were made up of individuals and 13.7% had someone living alone who was 65 years of age or older. The average household size was 2.39 and the average family size was 3.00.

There were 3,640 households out of which 34.2% had children under the age of 18 living with them, 56.0% were married couples living together, 8.4% had a female householder with no husband present, and 32.6% were non-families. 28.7% of all households were made up of individuals and 13.7% had someone living alone who was 65 years of age or older. The average household size was 2.46 and the average family size was 3.05.

All content from Kiddle encyclopedia articles (including the article images and facts) can be freely used under Attribution-ShareAlike license, unless stated otherwise. Cite this article:
Le Mars, Iowa Facts for Kids. Kiddle Encyclopedia.