Sioux County is a county located in the U.S. state of Iowa. As of the 2020 census, the population was 35,872. Its county seat is Orange City. Its largest city is Sioux Center.

The first county seat was Calliope in 1860, then a small village with 15 inhabitants, and now part of Hawarden. The first courthouse was built here in 1860 and served as such until 1872. A larger immigration wave began in 1869, primarily of Dutch. In 1872, Orange City was declared the seat. In June 1902, the construction began on a new Sioux County courthouse designed by W.W. Beach. Of red sandstone, it was completed in 1904, and still serves as the courthouse. From 1976 until 1982 the building was completely restored, and in 1977, it was listed on the National Register of Historic Places. 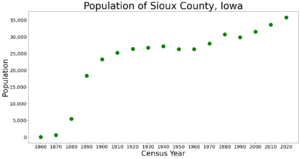 Population of Sioux County from US census data

As of 2011[update], 80% of the county residents belong to major denominational churches, compared to 36% of the total U.S. population.

The population ranking of the following table is based on the 2010 census of Sioux County.

Sioux County is the home to two four-year liberal arts colleges; Northwestern College in Orange City and Dordt College in Sioux Center. Both of these schools have enrollments over 1,000. Northwest Iowa Community College is also in Sioux County, though it is most often associated with the community of Sheldon in O'Brien County.

All content from Kiddle encyclopedia articles (including the article images and facts) can be freely used under Attribution-ShareAlike license, unless stated otherwise. Cite this article:
Sioux County, Iowa Facts for Kids. Kiddle Encyclopedia.