Everly is a city in Clay County, Iowa, United States. The population was 575 in the 2020 census, a decline from 647 in 2000. The Ocheyedan River flows to the south and west of the city. Famous people born here include Vern Fear.

Everly was founded as Clark, Iowa, in 1884, but soon took its current name because there was already a Clarke, Iowa. Everly incorporated on April 7, 1902. 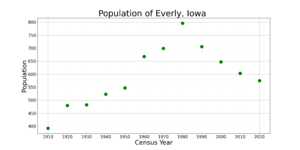 The population of Everly, Iowa from US census data

There were 270 households, of which 30.4% had children under the age of 18 living with them, 51.5% were married couples living together, 7.0% had a female householder with no husband present, 4.8% had a male householder with no wife present, and 36.7% were non-families. 32.6% of all households were made up of individuals, and 13.7% had someone living alone who was 65 years of age or older. The average household size was 2.23 and the average family size was 2.82.

Formerly the Fire Department and City Hall, the library is situated on the east side of Main Street.

Formerly the Fire Department and City Hall, the library is situated on the east side of Main Street.

All content from Kiddle encyclopedia articles (including the article images and facts) can be freely used under Attribution-ShareAlike license, unless stated otherwise. Cite this article:
Everly, Iowa Facts for Kids. Kiddle Encyclopedia.